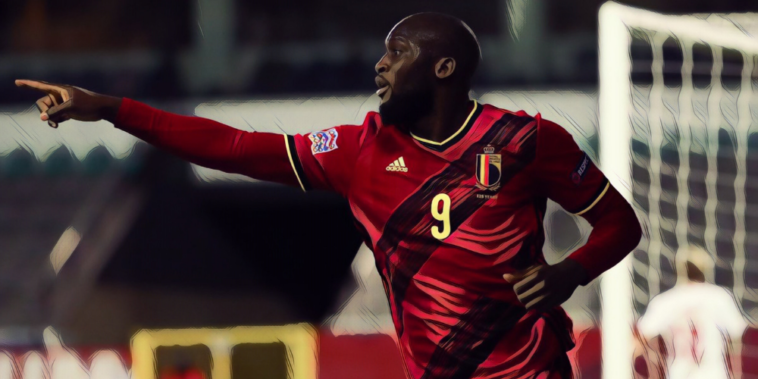 Predictions can often make a writer look foolish, but as Euro 2020 prepares to get underway this week we thought we’d try our hand once again at delving into our crystal ball and looking at how we see events unfolding this summer.

Some of Europe’s finest footballers will showcase their talents over the next month and we’ve attempted to choose an XI that we think will stand out across this summer’s European Championship.

Here is The Football Faithful’s predicted Euro 2020 Team of the Tournament.

Belgium are heavily fancied to reach the latter stages and should come through a group containing Denmark, Russia and Finland with minimal fuss, a scenario that will leave Roberto Martinez’s side facing one of the best third-placed teams in the last 16.

The Red Devils qualified for Euro 2020 with a perfect record of 10 wins from 10 and hopes are high that the nation’s ‘Golden Generation’ can deliver with major tournament success.

Thibaut Courtois won the World Cup Golden Glove in 2018 and will be crucial to Belgium’s hopes, expect the Real Madrid star to shine if FIFA’s number-one ranked nation have a successful tournament this summer.

Almost every major tournament possesses a surprise package and there are many who fancy Turkey to be Euro 2020’s ‘dark horse’, having qualified in fine fashion with just three goals conceded in a qualification group that contained world champions France.

That defensive strength could help Turkey make an impact and upset the odds at Euro 2020, with Zeki Celik set to be a player watched closely with reports having linked the likes of Manchester United, Arsenal and Tottenham with the right-back.

Having formed part of Lille’s title-winning side in Ligue 1 last season, a strong summer could propel Celik even further into the consciousness of England’s elite.

France boast an embarrassment of riches and are our favourites to be crowned champions, the current Les Bleus side looking to match the achievements of the 2000 vintage in adding the European Championship trophy to their World Cup success.

Raphael Varane remains one of the leading centre-backs in the game and the Real Madrid defender will lead the French backline this summer, a series of commanding performances potentially resulting in the adding of more silverware for a player who has collected winners’ medals in routine fashion throughout his career to date.

Aymeric Laporte will be tasked with replacing Sergio Ramos in the Spain squad this summer, no easy feat for a player who only earned his first cap for La Roja earlier this month.

Laporte opted to change his international allegiance to Spain earlier this year after being continually overlooked by France, with the Manchester City centre-back now provided a chance to shine at a major tournament.

Spain have been handed a straightforward looking route with Poland, Sweden and Slovakia their opponents in Group E, with Luis Enrique’s new-look side holding a strong chance of reaching the latter stages as the nation bids to reclaim the trophy won in 2008 and 2012.

Another member of the Spanish squad this summer, La Roja’s route to the latter stages could see several inclusions with Jordi Alba a potential nominee for Team of the Tournament.

Alba returned to the Spain squad after being overlooked throughout 2020 and impressed, providing three assists across two World Cup qualifiers against Georgia and Kosovo.

The 32-year-old is expected to captain the side should Sergio Busquets be ruled out after testing positive for Covid-19, an indication he could play a prominent role in Luis Enrique’s side.

Having enjoyed an excellent season with Barcelona that delivered five goals and 15 assists in all competitions, Alba’s forward forays could be a trademark of the Spaniard’s attacking play.

N’Golo Kante continues to collect trophies like they’re going out of fashion and, after starring during Chelsea‘s success in this season’s Champions League, is geared up for another tilt at silverware with France.

Brilliant during Les Bleus’ World Cup triumph three years ago, Kante remains integral to Didier Deschamps’ side and reiterated his status as one of the world’s best with Man of the Match showings in the 2020/21 Champions League semi-finals and final.

Kante’s box-to-box brilliance and unrivalled industry could prove pivotal as favourites France look to add the European Championship trophy to their World Cup success in Russia.

Belgium’s hopes will centre around a collection of elite talents, though it is Kevin De Bruyne who arguably holds the key to ending the Red Devils’ wait for major tournament success.

The 29-year-old remains arguably the most complete midfielder in world football and possesses the ability to unlock defences for Belgium this summer, his vision and passing range amongst the best on offer at Euro 2020.

Italy will wear a renaissance-inspired kit for this summer’s tournament and it is perhaps fitting attire for a nation who have bounced back from the ignominy of failing to qualify for the 2018 World Cup in style.

Roberto Mancini’s charges are unbeaten in 27 games across all competitions and have won their past seven fixtures by a combined aggregate score of 17-0, confidence high ahead of the tournament opener against Turkey on June 11.

That should prove a tricky assignment, but we’re predicting Italy to progress as group winners and make an impression, with Nicolo Barella set to play a starring role in a talented midfield containing Marco Verratti and Jorginho.

Barella has played an influential role in Inter Milan’s Serie A title success this season and the midfielder’s drive, creativity and vision marks him out as one to watch this summer.

Kylian Mbappe was named as the World Cup’s best young player three years ago and has only improved since France’s triumph in Russia, finishing as the leading scorer in Ligue 1 in each of the past three campaigns.

The 22-year-old has scored a staggering 78 goals in just 80 league appearances across the past three seasons for Paris Saint-Germain and will spearhead Les Bleus’ assault on Euro 2020.

Mbappe has shown in this season’s Champions League that he is capable of deciding games at the highest level almost singlehandedly and France’s stellar supporting cast – including Antoine Griezmann and the returning Karim Benzema – bodes well for summer success.

If there’s one thing that Jack Grealish’s seven-cap career with England has proven to date, it’s that the Aston Villa captain deserves a prominent role in Gareth Southgate’s plans.

Grealish has taken to international football with ease and his unwavering self-confidence is a welcome change to an England side where the shirts have often weighed heavy in previous tournaments.

England to qualify as group winners, before raising expectations by overcoming the runners-up from the ‘Group of Death’, only to predictably fall in the quarter-finals with moans that Southgate has wasted a brilliant opportunity for success.

Of another batch of nearly-men for the Three Lions, Grealish will be amongst the few to leave Euro 2020 with his reputation enhanced, perhaps even sparking a summer bidding war from the Premier League’s best.

For now, the English amongst us can dream of football finally coming home and the anointing of ‘Sir Gareth Southgate’ in the New Year’s honours list – what’s a major tournament without pipe dreams, after all?

Romelu Lukaku has evolved into one of Europe’s most complete centre-forwards since signing for Inter Milan, becoming a talismanic presence for the newly-crowned Italian champions and thriving under the guidance of the now departed Antonio Conte.

Lukaku lives and breathes scoring goals, but has shown a new side to his game this season with 11 assists for the campaign – the second highest figure in Serie A.

Throw in 24 league goals and it is a formidable forward package, whilst his record at international level matches up with the very best Euro 2020 has to offer with 60 goals in just 93 caps for Belgium.

The 28-year-old will fire the Red Devils’ ‘Golden Generation’ into the last four and win the Golden Boot, before being edged out by eventual champions France in the semi-finals.