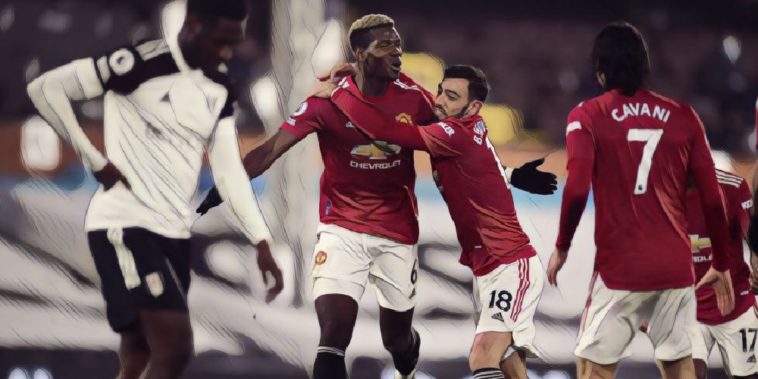 Paul Pogba scored a superb winner to move Manchester United back to the top of the table with a 2-1 win over Fulham.

Manchester United started the game down in third following Leicester and Man City’s wins, though the Red Devils began sloppily on a blustery night at Craven Cottage, and they found themselves behind after just five minutes.

It was a simple ball over the top to Ademola Lookman, with the United defence looking pretty static and failing to track the run, the 23-year-old being played onside by Aaron Wan-Bissaka before slotting home past De Gea with a low composed finish.

The visitors did eventually start to get a foothold in the game, and moments after Bruno Fernandes had hit the post from range, the Portugal international fired a pacey delivery in from the left, Alphonse Areola spilt the cross into the path of Edinson Cavani, the predatory striker tucking home the rebound.

While Fulham showed some moments of adventure early in the second period, United were largely camped on the edge of the Cottagers box as they attempted to break down the well-drilled west London outfit.

However, with 20 minutes of the second period gone, Paul Pogba took matters into his own hands, and unleashed a wonderful effort beyond Areola with his supposedly weaker left foot from the left hand side of the area.

This goal is pornographic. Before the watershed and all. pic.twitter.com/lWTRHyBWro

Moments later, Areola produced a fine reaction save to deny a close-range header from the impressive Edinson Cavani to keep his side in it.

Speaking afterwards, matchwinner Pogba described his winner as ‘beautiful’ in what was a ‘difficult’ game.

“It’s a big win because it was a hard game,” he told BT Sport. “We knew it would be difficult. They press really well and stay compact. We had to come back and we needed this win and we got it.

“I hit the ball well. I didn’t expect it with the left foot like this but if you don’t try, then you don’t score. It was a beautiful goal and a beautiful win. It wasn’t my favourite goal ever but it was still beautiful.”

It was reported that Pogba apologised to his Man Utd teammates following his crucial missed chance in the 0-0 draw with Liverpool, and he admitted he wasn’t happy with himself.

“I was really mad after the Liverpool game for not scoring the chance. I maybe should’ve done better but today it went in. Most important was the win today. We did it the hard way and did it the beautiful way.

Pogba’s future has been one of speculation fo a number of years, his agent Mino Raiola having declared his career his career at Old Trafford to be over last month, and the midfielder was again asked if he is happy amid the Red Devils’ resurgence.

“I love winning, it’s all about winning. I’m happy when we win on the pitch and angry when we lose.

“It’s the Premier League so it will always be hard. We have to do us and that’s it.”

Next up for United is an FA Cup fourth-round tie against Liverpool, before facing Premier League strugglers, Sheffield United in midweek.