“I don’t want to add fuel to the fire of him being my son.” When managers feel compelled to make such remarks about their players, something is clearly awry. For Frank Lampard, it was his method of staving off accusations of favoritism with regards to his consistent selection of Mason Mount in Chelsea’s starting eleven.

That favouritism is considered the most logical explanation of Mount’s presence in the Chelsea first team is indicative of his general perception amongst fans; not just of the Blues, but also of England.

During the Nations League and Euros qualifiers, social media was rife with criticism of Mount’s frequent appearances and seemingly lacklustre performances. How can Gareth Southgate be so deluded as to pick him over the likes of James Maddison, Phil Foden, and Jack Grealish? Surely these are players who, with their greater talent, flair, and end product, could bring much more to the Three Lions from the same position.

Before addressing the criticism Mount receives, it’s worth understanding what type of player he is. The Blues academy product is highly versatile, capable of playing in a midfield two, a midfield three, as a number ten, or a left-sided attacker in a front four or front three.

One of the reasons for this is his ability to receive passes from a variety of angles and then having the awareness and composure to progress it forward quickly. Not only does this allow him to be comfortable receiving possession in multiple areas on the pitch, but it also allows him to maintain the attacking momentum of his team’s passing sequences by not dwelling on the ball.

Mount is also extremely astute off the ball. For attack-minded midfielders, this usually means that a player makes intelligent runs into the box to either create space for others or get into optimal scoring positions. The 21-year-old does indeed excel at this and has scored several of his goals for Chelsea by exploiting the space created by the physicality and movement of strikers like Tammy Abraham and Olivier Giroud.

However, Mount’s off-ball intelligence extends beyond that. He is an immaculate presser of the ball and has a unique understanding in defensive transition. Even if many attackers in the modern game have become accustomed to pressing high, few recognize danger and react to in the way Mount does.

He possesses a defensive acumen and intensity that is more common for defensive midfielders or fullbacks as opposed to an attacking midfielder. It’s beyond work rate or willingness to defend. It’s genuine efficacy and defensive awareness that is scarce amongst attacking players.

It’s also incredibly valuable for Mount’s teams, as he can be trusted in the defensive phase irrespective of where he plays and can facilitate the high-pressing style that both England and Chelsea often seek to execute.

Perhaps the best indicator of Mount’s versatility and other attributes are his varying metrics from last season and this season. The data table below shows some of his statistics over the past two seasons.

Note: Numbers in brackets show percentile, so (91st) means Mount is in the top 91%.

A number of conclusions can be drawn from this data. It’s clear that Mount isn’t a traditional attacking midfielder, with either mediocre or poor chance creation in both the 2019/20 and 2020/21 seasons.

He’s also clearly an elite presser for his position. What’s interesting is how some of Mount’s other figures have shifted from last season to this season. He is making even less open play shot-creating actions and expected assists this campaign, but is making more yards progressed, less turnovers, and has a significantly better pass completion rate while pressing to a similar degree.

That indicates Mount is playing in a deeper position than last year in which he is circulating possession slightly more and progressing the ball from deeper and over longer distances. This is borne out below in his positional heatmaps during the past two seasons, with the first from 19/20 and the second from the current campaign: 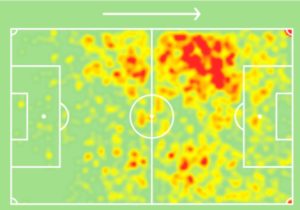 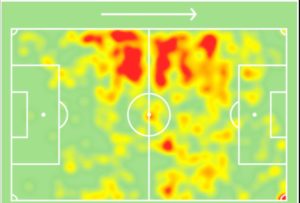 That Mount is playing in a deeper role makes sense given Chelsea’s recruitment. Timo Werner has predominantly been used as a left-winger, while Ben Chilwell plays extremely high and wide from left-back.

By playing in a more withdrawn role, Mount can make better use of his natural instinct to progress play forward, as more of the pitch is in front of him, while still being able to make late-arriving runs into the box, albeit with less frequency than before.

More importantly for Chelsea, it provides them with a greater degree of defensive cover — especially in defensive transition, where Mount’s anticipation, pressing, and intensity can provide cover for Chilwell.

It’s difficult to quantify how impressive or important this adaptability and tactical acumen is. Yet for Mount to be exhibiting such strengths at 21 is both unique and, in the eyes of his managers, hugely promising.

And that is why he starts for both club and country. For England, Mount is the ideal complement to the likes of Jack Grealish, Marcus Rashford, Jadon Sancho, or Phil Foden in either the double pivot or the front three of England’s 3-4-3.

Just like he does for Chelsea, Mount brings industry, intelligence, and intensity to England’s play. If he’s playing in the front three, he can act as the spearhead for England’s pressing. If he plays in a deeper role, he gives England a more mobile and progressive player in the double pivot while not significantly compromising their defensive security.

Of course, Mount has clear and obvious limitations. He isn’t the most clinical finisher, his decision-making is poor, his penetrative passing is erratic, and he isn’t an especially good ball-carrier. Swap him with Jack Grealish at club level, and Aston Villa would be having serious problems.

However, there’s reason to believe that with time, these aspects to his game could improve. As his sensational free-kick against Wolves on the final day of last season’s campaign and corner-taking for Chelsea have shown, Mount is a technically gifted player and has the raw attributes to be a more productive creative outlet.

Beyond this, though, just because he isn’t as aesthetically talented as some other players doesn’t mean that he doesn’t deserve to start over them. That may seem illogical, but as England fans themselves learned during their last golden generation of talent, shoe-horning your best players into a team without accounting for how they balance each other’s strengths and weaknesses is a guaranteed method for underachievement.

Teams have to be selected on their collective makeup, not solely the individual talent of their players. This isn’t an invitation for pejorative claims about how Grealish or other players don’t “put a shift in” or how they’re lazy. It’s simply to say that Mount’s strengths enable him to better complement his teammate’s qualities more appropriately than other seemingly more talented players who are more suited to having the team built around them.

Mason Mount will likely be a fixture of both Chelsea and England for years to come. His skillset may be slightly unorthodox and underappreciated by fans, but it will seemingly always have the backing of his managers and, in due time, may prove to be decisive in both Chelsea’s and England’s future success.