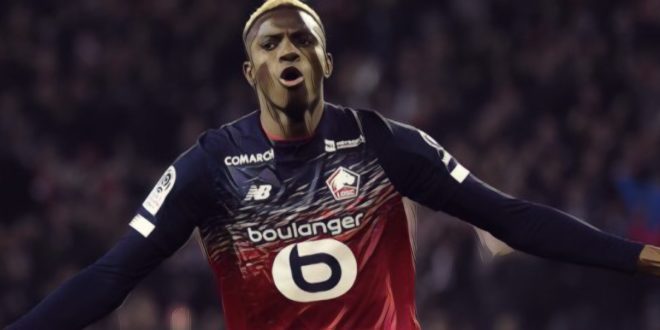 Of the major five European leagues, Ligue 1 tends to receive the least attention due to the overwhelming dominance of PSG. Such unchallenged primacy has obscured France’s array of supremely talented and interesting teams.

Over the past couple seasons, Lille have been one such side. Nicolas Pepe made headlines last season, while Rafael Leao secured a move to AC Milan. This season a resurgent Renato Sanches and talented centre-back Gabriel are among Lille’s intriguing talents.

Yet no player has been as widely acclaimed for the French side this campaign as 21-year-old striker Victor Osimhen. The Nigerian has attracted interest from a host of Premier League clubs and emerged as one of the most exciting talents in French football. Osimhen’s powerful finishing ability off either foot has seen him net 13 goals in 27 games, as well as laying on four assists for his teammates.

Under Christophe Galtier, Lille set up as either a 4-4-2 or a 4-2-3-1. Irrespective of their starting formation, they morph into a 3-2-5 shape in attack, one with clear parallels to the attacking structure adopted by Pep Guardiola’s Manchester City and Jurgen Klopp’s Liverpool.

By pushing one of the fullbacks high to join the attacking unit, Lille can outnumber opponents who use a traditional back four and look to assert their offensive style. They maintain their width to stretch opposition defenses and work numerical overloads through quick interchanges of passing and dynamic movement.

While through balls from the fullbacks or midfielders to the likes of Osimhen or wingers Jonathan Bamba and Jonathan Ikone are common, Lille are not afraid to use long balls as a means of bypassing an opposition press. These basic attacking patterns are synthesized with Galtier’s impetus to give his players a high degree of creative freedom, making Lille’s attack fluid, varied, and tremendously exciting.

Osimhen has thrived in this system. With just 0.6 dribbles and 0.8 key passes per 90, Osimhen is not among Lille’s more skillful or creative players, and he leaves much of the responsibilities of build-up play to his teammates. What has made him indispensable for Lille this season, however, has been his dual function as a line leader: a pacy forward capable of running beyond the defensive line and a target man.

With his 6’1” frame, Osimhen can effectively contest aerial contests from crosses or long balls. He wins an impressive 4.4 aerial duels per 90, a testament to both his physical ability and his movement. In a similar way to Mario Mandukic when he was at Bayern Munich, Osimhen often drifts wide from his nominal central position to contest aerial duels against diminutive fullbacks. Not only does this increase the efficacy of Lille’s long passes, it disorients the opposition defence and creates space for Osimhen and his teammates.

Even in central areas, the 21-year-old looks to maximize his aerial prowess through astute movement, often moving one way before changing direction at the last moment, tricking his marker and creating room for himself to score with greater ease. His hold-up play is also excellent, as he is comfortable with playing with his back to goal.

Holding off defenders with his strength, he can lay the ball off and allow Lille’s attacking players to make advancing runs beyond him. Osimhen perhaps lacks the domineering physique of a Zlatan Ibrahimovic or Olivier Giroud, but he is still a remarkably effective target man.

Osimhen’s movement is also crucial when he is tasked with attacking the space behind the defensive line. He will often look to take up positions in between the centre-backs or the central defenders and-right back before bursting onto through passes from his teammates.

His timing and anticipation are immaculate, allowing him to be one step ahead of opposition defenders and make the most of such situations. The young Africans pace and movement are also an asset in transition, as he can serve as the central outlet for Lille’s counter-attacks.

Pressing is an increasingly important element of a team’s style and forwards with exemplary defensive work rates and tactical intelligence are more prized than ever. Lille tend to vary their pressing approach based on their opponent and are not the more aggressive exploiters of the tactic.

Nevertheless, Osimhen is a willing and capable presser. He is especially good at blocking backwards passing lanes after an opposition teammate is pressured and seeks to play a backwards pass. It is an element of his game he could improve upon, but any deficiencies he has in pressing are more of a reflection of his team’s approach rather than his qualities as a player.

Osimhen’s playing style and physical attributes would presumably make him well-suited to the Premier League. Chelsea are reportedly interested, although they would likely have to offload the likes of Michy Batshuayi and Olivier Giroud before acquiring another player for the same position.

The Nigerian has been heavily linked with Manchester United, and he could replace compatriot Odion Ighalo should his loan not be extended. Liverpool has also been tentatively linked, although a move for Timo Werner seems more likely and would eliminate the need for a player of Osimhen’s qualities.

Leicester City presents an intriguing proposition for Osimhen. While deficient in the allure of other top six clubs, the Foxes are an exciting, upwardly mobile club with a slew of talented players. Should European competition take place next season, they will also be playing Champions League football.

Among the many positions they would need to strengthen would be at centre forward, as Leicester need to consider replacements for the prolific yet ageing Jamie Vardy. Osimhen could provide Brendan Rodgers with an excellent back-up striker option, who could replace Vardy in the not-too-distant future.

If he makes the move to England, Osimhen will be one of the most fascinating young players to watch in the Premier League. Whether he can replicate and build-upon his promising season for Lille will be interesting to see.

Read Also – Player Analysis: How would Timo Werner fit in at Liverpool?