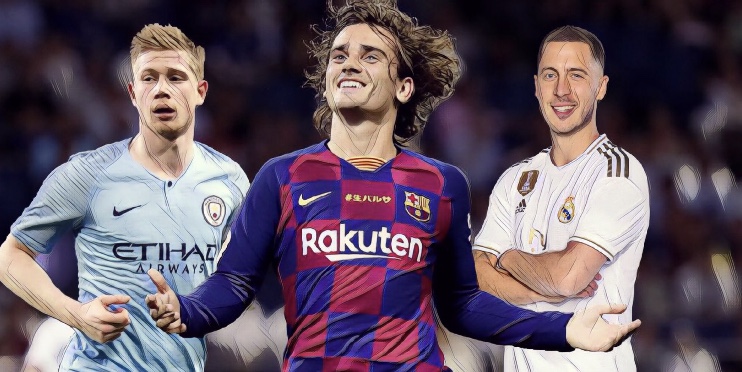 Football transfer fees continue to skyrocket, with barely believable sums being exchanged between clubs for the very best talent.

Spending £50m was once a huge summer outlay for leading clubs, but the figure is now regularly paid to add just a single player to their expensively assembled squads.

We’ve decided to compile an XI of some of football’s most expensive signings, and it is quite some team. Here, in an attacking 3-4-3 formation, is the best XI of players who cost more than £50m…

Just two contenders for this position, with Liverpool’s Alisson taking the position in goal ahead of Chelsea’s Kepa following an outstanding debut season in English football.

The Merseyside club decided to rectify their problem by spending a then world-record on the Brazilian number one, who brought an instant presence to the club’s backline.

His debut season saw him win the Premier League’s Golden Glove with 21 clean sheets as Liverpool narrowly missed out on the title, though their disappointment was short-lived as they were crowned champions of Europe by beating Tottenham in the Champions League final.

Alisson also kept the most clean sheets in that tournament, and did so again in this summer’s Copa America, emerging victorious as Brazil won a first major trophy since 2007.

The Dutch defender emerged as one of the hottest properties in European football after captaining Ajax to a domestic double, whilst the Amsterdam side also made an impression on Europe by reaching the semi-finals of the Champions League.

An impressive feat by any captain, but what makes De Ligt stand-out as potentially special is that this was all achieved whilst still a teenager.

Trusted to lead the Netherland’s biggest club aged 17, the continent’s biggest sides were scrambling to secure his signing before Italian champions Juventus won the race.

A precocious talent, De Ligt has also proven he belongs at the highest level and has been tipped to develop into the world’s best defender.

Another player in our team who helped transform Liverpool’s leaky defence into one of Europe’s strongest, Virgil van Dijk’s £75m switch to Anfield in 2018 made him the world’s most expensive defender.

His impact was instant, scoring on his debut against rivals Everton, whilst his imposing performances improved the side around him.

His first full season saw him crowned as the PFA Player of the Year as Liverpool boasted the Premier League‘s best defensive record, before helping Jurgen Klopp’s side to a sixth European crown with Champions League success.

Amongst the favourites for the 2019 Ballon d’Or, Van Dijk could become the first defender to win the prestigious honour since Italy’s Fabio Cannavaro in 2006.

Signed from Athletic Bilbao in 2018, Laporte has quietly established himself as the first-choice defender in Pep Guardiola’s all-conquering Manchester City side.

The French defender possesses a cultured left-foot and carries the ball out of defence comfortably, establishing himself amongst the Premier League’s leading centre-backs.

One of the first names on the team sheet for arguably the Premier League’s greatest ever side, Didier Deschamps’ continued omission of Laporte from the national team remains a mystery.

The French midfielder returned to Manchester United in a then world-record £89m deal in 2016, having left the club four years earlier in search of first-team opportunities.

Pogba found those opportunities in Turin with Juventus, winning four consecutive Serie A titles and blossoming into one of Europe’s most promising midfield talents before returning to Manchester.

A League Cup and Europa League double was celebrated in his first season, but he has since struggled to exert his influence over a United side currently in transition.

Blessed with superb technique to match his athleticism, he has showcased the full range of his talents on the international stage, playing a key role in France’s victorious 2018 World Cup campaign.

The Belgian midfielder proved a misfit at Chelsea, but after developing his game in the Bundesliga returned to light up the Premier League at Manchester City.

De Bruyne possesses all the attributes needed in an elite midfielder, with few players in Europe as complete. Few in the Premier League can match his vision and passing range, De Bruyne arguably the most important player in the Manchester City squad.

Signed for £55m in 2015, his fee has proven money well spent in the ever-increasing world of football transfers.

Antoine Griezmann joined the list of £50m+ players this summer, swapping life in the Spanish capital at Atletico Madrid for their La Liga rivals Barcelona in search of further major honours.

At Atleti, Griezmann flourished from talented wide player into multi-purpose forward, scoring 133 goals in 257 appearances for Diego Simeone’s side.

On the international stage he has been similarly prolific, scoring 29 goals in 70 caps for France, helping the national side to World Cup success in 2018.

Another player to join this exclusive list this summer, Eden Hazard became Real Madrid’s latest ‘galactico’ signing after joining from Chelsea in a deal which could rise to £130m.

At the Bernabeu, Hazard will be expected to help replace the creative and goalscoring void which was left by Cristiano Ronaldo’s departure in 2018, with the 28-year-old ready to fulfil his boyhood ambition of starring at the Spanish giants.

The deal which shocked football, transfer fees were forever changed when Neymar became the most expensive footballer in history in 2017.

The Brazilian’s switch from Barcelona to Paris Saint-Germain cost the French side a whopping £198m, smashing the record fee.

Neymar had formed part of a potent trident with Luis Suarez and Lionel Messi at the Nou Camp, helping the Catalan side to Champions League success in 2015.

Ready to step out of Messi’s shadow, Neymar moved to France in a bid to stake his claim for the Ballon d’Or and has scored 51 goals in 58 appearances for the Parisian side.

Just 27, Neymar is one of the world’s best and is third highest goalscorer in the history of the Brazil national team, rapidly closing in on the legendary Pele’s 77-goal landmark.

Barely out of his teens, the French forward is already a star and seemingly the heir apparent to the Ronaldo/Messi era as the game’s best player.

After breaking through in the exciting, young Monaco team which upset the odds to win Ligue 1, Mbappe moved to Paris Saint-Germain in a deal which made him the second most expensive player ever and has since won two further French top-flight titles.

The latter of those came last season, where Mbappe finished as the division’s top scorer and was crowned Player of the Year.

On the international stage, he helped fire France to World Cup glory in 2018, becoming the first teenager since Pele to score in the final and being named as the tournament’s best young player.

Whether the French league is of sufficient level to keep a player of his undoubted quality remains to be seen, though Mbappe would likely cost a record-breaking figure for any potential suitors.

One of the games’ all-time greats, the Portuguese superstar continues to defy logic in his quest to be acknowledged as the world’s best.

Records continue to fall, whilst at almost 35 he continues to remain amongst the planet’s very best players. A joint-record five Ballon d’Ors demonstrate his quality and legacy, and he continues to thrive on the biggest stages of the world game.

Real Madrid’s all-time record goalscorer and the most prolific forward in Champions League history, he will bid to win Europe’s biggest prize with a third major club at Juventus next season.

His list of accolades are endless and unlikely to be matched, fans should enjoy him whilst he’s still at the very top.