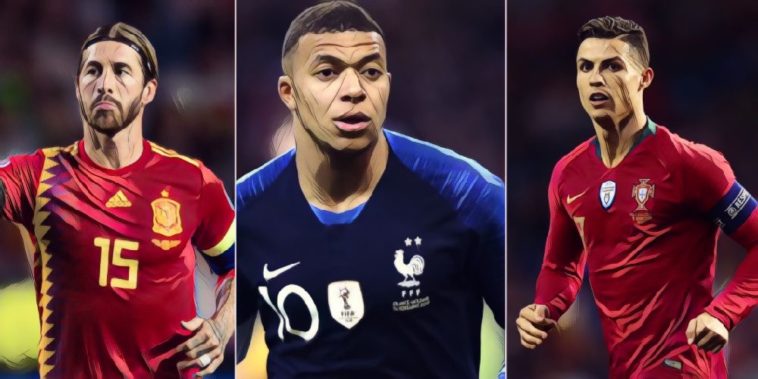 Next summer will bring a rescheduled European Championships that is sure to provide a thrilling summer of international football action, the continent’s biggest nations competing to be crowned as Euro 2021 champions.

Avid watchers of the Premier League will be familiar with many faces on show in the tournament, though for those unfamiliar with foreign leagues it provides an opportunity to see some of the game’s best stars on the international stage.

We’ve decided to compile a superb side of the leading global names set to feature in next summer’s tournament, here is the best non-Premier League XI at next summer’s Euros.

Germany’s goalkeeping great will once again lead the perennial contenders into another major tournament, Neuer having returned to his very best during a historic treble-winning campaign at Bayern Munich last season.

The 34-year-old was excellent in helping the Bavarians to Champions League glory and remains one of – if not the – very best goalkeepers in world football, a formidable presence and amongst the best to have ever adorned the gloves.

Germany are not quite the powerhouse of old but possess an exciting mix of youthful promise and trophy-winning experience, Neuer tasked with guiding a transitional side out of the tournament’s Group of Death that also features world champions France and holders Portugal.

Currently recovering from a knee injury, Dani Carvajal’s impending return sooner than expected will be a welcome boost for Real Madrid, whilst Spain will be closely monitoring his progress ahead of next summer’s Euros.

Carvajal remains one of the most dependable right-backs in world football and perhaps underrated despite a lengthy career of success at the highest level, winning two league titles and the Champions League on four occasions during a trophy-laden career at the Bernabeu.

Spain are currently regarded as fourth favourites to win the trophy they previously lifted in successive tournaments in 2008 and 2012, with Luis Enrique’s side outlining their intentions with a 6-0 Nations League thrashing of Germany last week.

Leading the Spanish into next summer’s tournament will be Sergio Ramos, who became the most capped male player in the history of European football during the international break.

Despite turning 35-years-old before the tournament commences next summer, Ramos remains an irreplaceable figure for Spain and will be key figure in their hopes of conquering Europe, the centre-back an elite defender and a serial winner for both club and country.

Ramos may not be the most popular figure in football given his penchant for the dark arts but there are fewer more influential leaders in the modern game, and few finer defenders despite his advancing years.

Raphael Varane – like many of his Real Madrid teammates – may not be enjoying his finest period at present but there are few better centre-backs in the game than the French World Cup winner.

Varane has conducted his business in an unassuming style for several seasons and stands as one of the most elegant and classy centre-backs in world football, a player who has rarely looked flustered throughout a career spent collecting an abundance of winners’ medals.

Quick, imposing and a brilliant reader of the game, his consistent excellence is perhaps reason for him failing to grab quite the same attention that is afforded to some of his defensive contemporaries.

Despite his recent blip, class remains permanent and expect Varane to play a central role in France’s quest to win back-to-back major tournaments next summer.

Slotting in at left-back in our side is a player who could well have featured in a number of positions in this XI, David Alaba amongst the most versatile players in the game.

Already this season the Austrian international has played at centre-back, left-back and further forward on the left flank for club and country, his multi-faceted talents invaluable to his respective sides.

Alaba burst onto the scene as a teenager at Bayern Munich and remains a key figure at the Allianz Arena, winning nine league titles and the Champions League twice, including as part of a treble under Hansi Flick last season.

Few will be expecting Austria to reach the latter stages, but a squad possessing the likes of Alaba and Marcel Sabitzer will be confident of progressing out of a group containing the Netherlands, Ukraine and North Macedonia.

If the versatility of David Alaba is commendable, than the multi-skilled talents of Joshua Kimmich are hard to fathom, a player who quite possibly ranks amongst the world’s very best in both midfield and at right-back.

Kimmich forms part of our two-man engine room in this side and is a conductor for both club and country, a player capable of plugging defensive gaps whilst progressing the ball with intelligent passing play.

The 25-year-old is a natural leader and combines his technical qualities with a spirit and desire that brings the best from those around him, a fantastic player and one who rarely disappoints on the biggest of occasions.

We’ve opted for an all-German midfield pairing with Toni Kroos joining Kimmich in the centre of our side, the Real Madrid midfielder having long been amongst the finest passers in world football.

The 30-year-old completed an astonishing 2,184 of his 2,336 passes for the Spanish champions last season and has begun the new season in similar vein despite their indifferent form, his 92.6% pass completion marking him out amongst La Liga’s best.

Kroos recently reached a century of caps for the national side and will be amongst their most experienced figures during next summer’s tournament, the midfield metronome’s ability to pick passes between the lines a major weapon for a side possessing the pace and movement of Serge Gnabry, Leroy Sane and Timo Werner in attack.

It’s not often that Cristiano Ronaldo has been positioned slightly away from his preferred role, though we’re hopeful the Portuguese superstar won’t mind a position on the right given the attacking talent we’ve shoe-horned into this side.

Ronaldo remains amongst the game’s greatest talents despite entering his mid-thirties and will be the undisputed key figure in the Portugal side next summer, the five-time Ballon d’Or winner rapidly closing in on Iran’s Ali Daei’s all-time record of 109 international goals.

In a career which has seen the Juventus forward shatter all kinds of records for both club and country, it seems a matter of time before Ronaldo becomes international football’s greatest ever goalscorer and what better stage than at next summer’s Euros.

Portugal face both France and Germany in a fascinating group also containing Hungary and will need their talismanic captain to produce once more next summer.

Eden Hazard’s mega-money move to Real Madrid has failed to work out as hoped at present, the winger having struggled during a difficult debut season and yet to replicate the performances that made him arguably the Premier League’s best at Chelsea.

Hazard, however, remains central to Belgium and their golden generation’s hopes of winning a major tournament, the 29-year-old the captain of Roberto Martinez’s side who currently stand as the number one ranked team in international football.

Hazard was excellent in being awarded the World Cup’s Silver Ball as Belgium reached the tournament’s semi-finals three years ago and will be looked to for inspiration once more, his ability to make things happen in attacking areas potentially decisive in the latter stages of the tournament.

France head into the tournament amongst the favourites to add the European Championship to their World Cup crown won in 2018, the world champions a brilliantly balanced squad packed with talent all over the pitch.

The jewell in the French crown, however, remains Paris Saint-Germain superstar Kylian Mbappe, the forward having been named as the World Cup’s best young player after scoring four goals, including becoming the first teenager since Pele 60 years earlier to score in the final.

Mbappe has since flourished into one of the game’s finest forwards and has scored 73 goals in just 83 league appearances since signing for PSG, winning three successive league titles and twice finished as the leading scorer in Ligue 1.

France face a fight to quality from their difficult-looking group, with much of their hopes pinned on the shoulders of their captivating 21-year-old star.

Is there a better player in world football right now than Robert Lewandowski?

But for the Ballon d’Or’s unprecedented cancellation in 2020, Lewandowski would surely be celebrating his coronation as the best player on the planet following an incredible season for Bayern Munich.

The Poland international scored 55 goals in all competitions to inspire Bayern to a Bundesliga, German Cup and Champions League treble, finishing as the leading scorer in each competition in a remarkable individual campaign.

The 31-year-old’s goals were also crucial to Poland’s qualification for next summer’s tournament in convincing fashion, winning eight and drawing one of their 10 fixtures to comfortably top Group G.

There will be fewer players more feared at Euro 2021, the defences of Spain, Sweden and Slovakia well aware of the threat posed by the prolific Polish icon.

See also – Tweets of the Week: Rashford’s gafs, official sources, and the most Jose vs Pep match of all-time