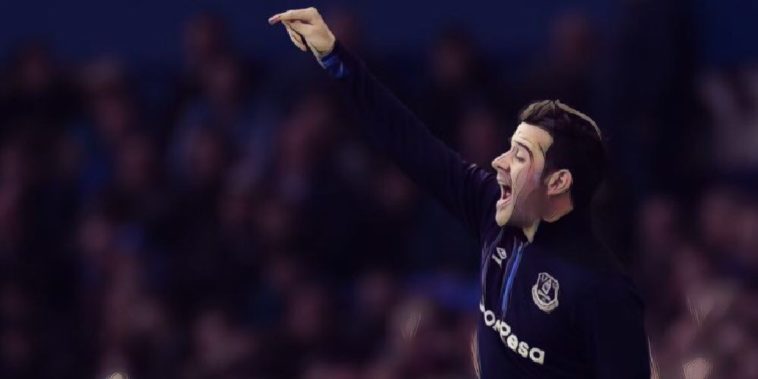 Jordan Pickford insists that Everton’s players are fully behind Marco Silva despite the clubs disappointing form this season.

Not only are the Toffees in a perilous position in the table, but they also have an unenviable run of fixtures on the horizon; their next four games feature Leicester, Liverpool, Chelsea and Manchester United.

However, despite the club’s current struggles, Blues goalkeeper Jordan Pickford has insisted that the players are fully behind the under-fire Portuguese boss.

“The only way forward is by sticking together,” Pickford told the Observer.

“We have good strength in depth and a lot of talent at this club and there’s plenty of fighting spirit in the dressing room.

“The manager has been great with us and we are behind him 100%.

“A few bad performances shouldn’t put a manager under pressure but that’s the industry we are in. I don’t want to see the manager sacked. I was here when Ronald Koeman lost his job and it was horrible, not nice to see at all.

“We players have to take our own share of the responsibility and try to put in a good performance. We just have to keep going and hope the negative results will bring the best out of us. We might be in a sticky patch but the squad is still together.”

The Mirror reports that the Merseyside club have scrapped their plan of bringing back David Moyes, with Eddie Howe the club’s “top choice” to replace Silva.

Meanwhile, the Mail is reporting that should Everton choose to sack Silva before Wednesday’s Merseyside derby against Liverpool, club legend and former hardman Duncan Ferguson would take temporary charge.

Read: Five clubs to suffer the most defeats in Premier League history

See Also: Pellegrini insists players have his back after Chelsea win