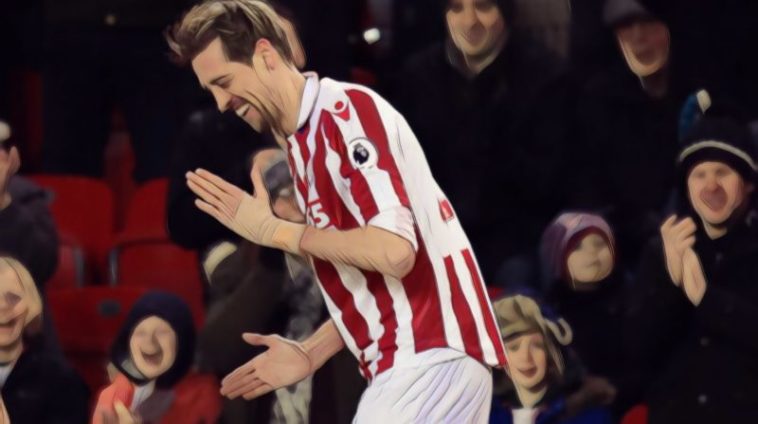 Ever-popular former England forward Peter Crouch announced his retirement from football this week, bringing an end to a nomadic career for one of the Premier League’s greatest journeymen.

The brilliant beanpole’s 21-year professional career took in spells at 11 different clubs, whilst an international record of 22 goals in 42 caps demonstrated his undoubted quality.

So here are five of Peter Crouch’s most memorable footballing moments, and let’s kick things off by looking at a brilliant tweet that shows Crouchey’s ability to take the piss out of himself, a quality that only further endeared him to almost all football fans regardless of your club allegiances…

Summer for me is about time with family . pic.twitter.com/dtft1CZoyl

After kick-starting his career with successful second-tier spells at QPR and Portsmouth, Crouch proved he could cut it in the Premier League at Southampton, which earned his big move to European champions Liverpool.

His Anfield career started slowly, failing to score in his first 19 games, however his importance grew during his debut season in Red. He scored a vital winner as the Merseyside club beat arch-rivals Manchester United in the FA Cup fifth round, with Rafael Benitez’s side advancing to the final against West Ham.

Crouch started alongside Djibril Cisse in attack, with Liverpool coming out on top via a penalty shoot-out following a topsy-turvy final in Cardiff.

With a little help from a heroic Steven Gerrard display, Crouch won the sole major honour of his career in 2006.

Whilst never a guaranteed starter for England, Crouch’s record of 22 goals in 42 caps showed his ability to perform on the highest stage. Having recently established the ‘robot’ as his goal celebration, Three Lions fans were treated to the Crouch trademark as he hit a pre-2006 World Cup hat-trick against Jamaica at Old Trafford.

Having opened the scoring via a set-piece, Crouch netted his second from a Jamie Carragher cross as England ran rampant in Manchester. The then-Liverpool striker thought he had wasted a glorious chance for a Three Lions treble after comically blazing a panenka style penalty over the bar, only to hit his hat-trick from Michael Owen’s pass late on.

Crouch would go on to score in the World Cup finals that summer, heading home against Trinidad and Tobago, memorably gaining himself some leverage by pulling the defender’s dreadlocked hair.

By 2007, Crouch had proven he belonged at the top level and the first hat-trick of his club career proved his class.

Liverpool faced Arsenal at Anfield in March of that year, with Rafael Benitez’s side thrashing the visitors 4-1 in a memorable clash. Key to Liverpool’s success was the performance of Crouch, who scored a perfect hat-trick of left-foot, right-foot and header to seal the three points.

Unplayable at his best, his third goal was perhaps the most aesthetically pleasing and demonstrated the confidence of the forward. A clever flick inside before a resounding left-foot finish, sealing a hat-trick and victory for Liverpool.

In 2010, Tottenham had been bidding to establish themselves amongst English football’s biggest clubs, desperately seeking Champions League qualification for the first time and a chance to test themselves against Europe’s elite.

In May 2010, Spurs travelled to the Etihad to face recently-rich Man City, who themselves were attempting to gatecrash the Premier League’s top four and earn their place at Europe’s top table for the first time.

The game was billed as a cup final, and a tense encounter was decided courtesy of Crouch’s intervention. The forward’s late header sealed a 1-0 win in Manchester, sealing Tottenham’s place in the top four and bringing Champions League football to White Hart Lane for the first time.

Tottenham’s players famously soaked manager Harry Redknapp in the post-match celebrations, but it was Crouch who was the hero that night.

Manchester City fans might well be pleased with the news of Crouch’s retirement, with the forward having delivered some telling moments against the blue half of Manchester during his career.

Crouch had already dismissed the stereotypes of the archetypal target-man, having produced moments of brilliance with a series of technical goals, including overhead kicks for Liverpool against both Bolton and Galatasaray.

However, his goal for Stoke which sealed a 1-1 draw against City in 2012, is unquestionably his greatest.

Cushioning the ball upwards with the inside of his foot, Crouch swivelled and delivered a stunning, dipping volley which left Joe Hart clutching at thin air. It was a goal of sheer brilliance, and the most memorable from a lengthy career for the big man.