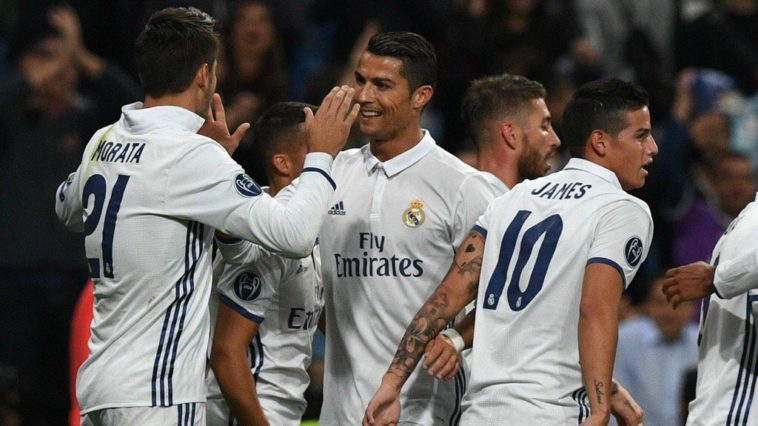 Despite reports, Manchester United have not made a bid for Real Madrid striker Alvaro Morata, according to club president Florentino Perez.

Manchester United have been linked with a plethora of Real Madrid players this summer, including James Rodriguez, Raphael Varane, Alvaro Morata and most recently, Cristiano Ronaldo.

It had been claimed that United had lodged two bids for Spain international Alvaro Morata. The first bid of £52m was said to have been rejected before a second bid of £60m was lodged. However talks were then said to have been put on hold as United mulled over a move for wantaway star Cristiano Ronaldo.

Speaking to Radio Station Onda Cero, Perez claimed that they had received no bids for any of their star players.

“We haven’t received offers for anyone this summer.

“Not Cristiano, not Morata — not James [Rodriguez].”

He then added further clarification to reports saying that Ronaldo would not be sold for anything less than his buyout clause, which stands at a staggering €1 BILLION (£880m)

““I haven’t spoken to Cristiano since the Champions League final — I heard the rumours through the media.

What is for sure, this seems like a saga that is sure to drag on.

Personally, we think that Morata is the most likely to join Manchester United, and this is something that is backed up by the bookmakers. The striker is 4/11 to move to Manchester United and 4/1 to remain at Real Madrid. Ronaldo meanwhile is 5/2 to return to Old Trafford but 4/11 to remain at the Bernabeu. Chelsea are the favourites to sign James Rodriguez.