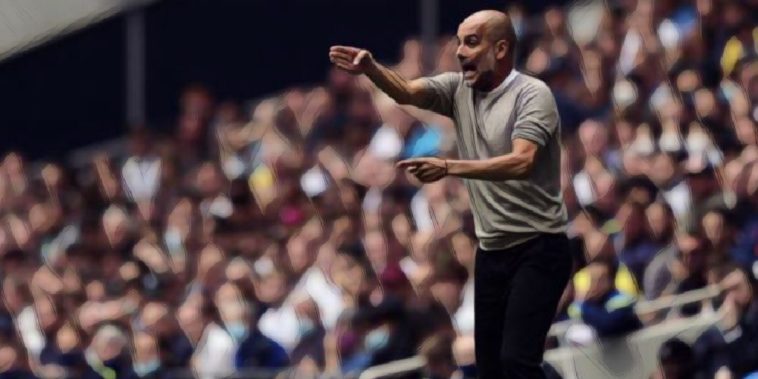 Manchester City’s defence of their title got off to a stuttering start, as they once again slipped to defeat against Tottenham in North London.

It was a game that was played under a huge Harry Kane shaped shadow, the Spurs captain having agitated for a move to today’s opponents, who have already seen a £100 million bid turned down and are thought to be preparing a new bid.

As for the match itself, City started by far the brighter of the two sides, with Jack Grealish and Raheem Sterling a particular threat down the left, Spurs’ Japhet Tanganga tasked with nullifying the English pair.

Spurs did however start to get a foothold as the first half wore on, Lucas Moura seeing a shot blocked almost on the line by Ilkay Gundogan, while Heung Min Son saw a curling effort deflected wide.

The north London side had looked threatening on the break throughout the first period, and it was through a counter that the game’s opening goal would come 10 minutes after the restart. Steven Bergwijn drove into the Man City half before laying it off to Son on the right, who cut inside and curled a left-footed effort into the bottom corner from just outside the area.

Bergwijn squandered a chance to make it two shortly afterwards, the Dutchman capitalising on a loose ball only for his first touch to take it away from him slightly before he put his effort wide.

While Man City had by far the most attempts, only four of them would be on target, with Spurs putting in a resilient defensive display to claim a fourth successive victory and clean sheet over Pep Guardiola’s side at the Tottenham Hotspur stadium.

3 – Manchester City have lost three consecutive games in all competitions without scoring a single goal for the first time since March 2007 under Stuart Pearce. Alarming. pic.twitter.com/kWdvobiOEJ

Speaking afterwards, Guardiola insisted his side were generally ‘really good’, but conceded that his team have room for improvement.

“We started really well,” he told Sky Sports. “We had problems in some transitions and we weren’t good enough. We conceded due to loose balls. In general, the intention to create chances we did much more but unfortunately, we were not good enough to finish them and we lose the game.

“We lose the ball, they went in behind. Lucas Moura had the quality to drive with the ball. It happened because we could not make the simple things better.

“We lose the ball on the inside and they drive on the outside when it was clear we had to defend deep. Apart from that in general it was really good. Sometimes we lose the second balls but in general, it was good.”

The Catalan didn’t seem too concerned at the dropped points, pointing to the fact that a number of his side have only just returned to training following their international exploits.

“Two days ago was the first day we were together so I know players need time to come back mentally,” he said. “One more week, it’s still the beginning of the season so we need to start to win games.

“There are 37 more games. It is a long season ahead. We try to correct some things then after that we are going to come back with our best.”

Next up for City is a home game against Norwich before they host Arsenal at the Etihad the following week.