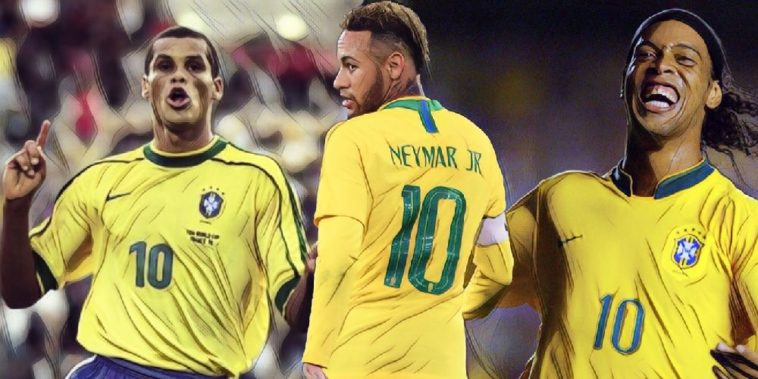 Perhaps no nation in world football is as synonymous with attacking talent as Brazil, the five-times world champions having produced some of the finest footballers the game has ever seen.

Many of those samba stars have often worn the illustrious number 10 shirt, made iconic by the exploits of the legendary Pele as Brazil conquered the footballing world.

Since Pele created his legacy in the number, however, several stars from the South American nation have made their own history in the jersey and we’ve decided to revisit some of the greats.

The man who made the shirt iconic, football fans of a certain generation will tell you that the legendary Brazilian is the greatest footballer of all-time.

Pele would burst onto the scene as a teenager at the 1958 World Cup, playing key role in the Brazil team that were crowned world champions for the first time. The then 17-year-old would score the winner in the quarter-finals against Wales, before hitting a hat-trick in the semi-final victory over France to set up a final meeting with hosts Sweden.

The forward would score twice more in a 5-2 final success, one of only two teenagers alongside Kylian Mbappe to have scored in the game’s greatest showpiece.

The World Cup would be retained four years later although his role was reduced due to injury, before sealing a third trophy with victory at the 1970 finals in Mexico, scoring once again in the final.

A pioneer who would change the game, Pele scored 77 goals in just 92 caps, his inclusion in talk of the game’s all-time greatest some four decades after his retirement a testament to his legacy.

Nicknamed the ‘white Pele’, Zico would be one of a long list of emerging Brazilian stars referred to as the new version of the country’s greatest ever player.

Unlike so many banded with the label, however, Zico would establish himself as one of the nation’s finest within his own right.

A diminutive attacking midfield player, Zico was arguably the world’s best player at his peak, a creative playmaker who possessed excellent technical skills and an eye for goal, scoring 48 goals in just 71 appearances for the Seleção.

Remembered as one of the greatest players never to win a World Cup, Zico was part of the Brazil squad for the 1982 World Cup which is widely considered one of the country’s best, despite failing to win the tournament.

One of the most skilful players of his generation, Rivaldo would help Brazil to back-to-back World Cup finals – winning the latter – and being named in the team of the tournament on both occasions.

Sandwiched between those tournaments was the country’s 1999 Copa America success, in which he finished as equal top scorer and was named as the player of the tournament.

A creative forward capable of playing across the frontline, Rivaldo perhaps does not get the credit some of his illustrious compatriots receive, though he was unplayable when at his very best.

His performances at the 1999 Copa America ultimately saw him crowned as the world’s finest player with Ballon d’Or success, before he would help Brazil to a fifth World Cup triumph as part of a dangerous attacking armoury alongside Ronaldo and Ronaldinho in 2002.

Rivaldo would retire having scored 35 goals in 74 appearances for Brazil, whilst he also often delivered on the biggest of occasions.

Simply unstoppable at his very best, those who got to witness the brief but brilliant reign of Ronaldinho as world football’s best player were treated to some truly magical moments.

The buck-toothed Brazilian played the game in the most joyous of ways, rarely without a smile on his face and producing pieces of skill rarely seen before or since.

The catalyst behind Barcelona’s emergence as perhaps the great club of modern times, Ronaldinho would help Brazil to World Cup glory in 2002 – albeit in the number 11 shirt – before becoming his country’s stand-out star in the years following that success in Japan and South Korea.

An unforgettable player when in his pomp, his audacity brought him a whole host of admirers and he made his final appearance for Brazil in 2013, having scored 33 goals in 97 appearances.

Like him or loathe him, there is a very realistic chance that Neymar could become the greatest goalscorer in the history of Brazilian football.

At just 27-years-old, the Paris Saint-Germain star is already his country’s fifth-highest appearance maker with over 100 caps, whilst only Ronaldo and Pele have ever scored more than his 61 goals so far.

Named as the Player of the Tournament in the 2013 Confederations Cup, Neymar will need to deliver at either a World Cup or Copa America to cement his status as a great, with next summer’s Copa in Argentina and Colombia potentially a prime time to star.

A brilliantly skilful forward, his goal record matches up to the best and with silverware success he could be remembered alongside the all-time best Brazilians.

Read Also: Five of the best managers not to win the Premier League