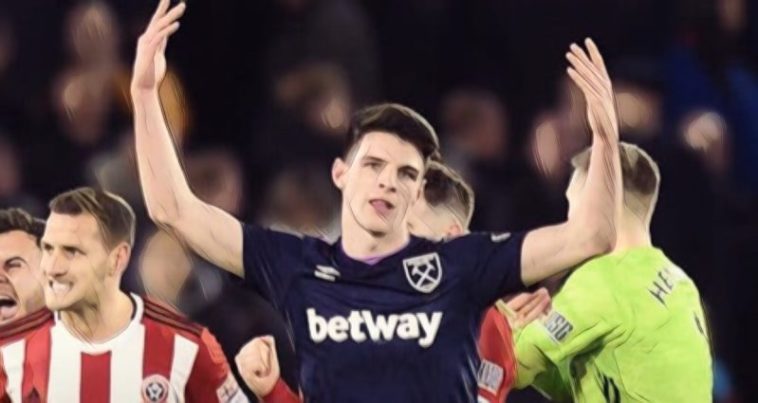 Paul Merson has urged his former side to make a move to sign West Ham’s Declan Rice, saying Arsenal are ‘crying out’ for a player in his position.

The West Ham and England midfielder has been linked with a possible move to Chelsea this week, while Manchester United are also thought to be admirers following his breakthrough campaign in east London last season.

However, Paul Merson reckons the 21-year-old is exactly the kind of player that Arsenal need to sign this summer, admitting he ‘can’t believe’ his old side aren’t looking to secure his signature, while also highlighting the importance of the holding role in the modern game.

“The holding midfield position is a massive part of football now,” Merson told Sky Sports. “I think some people look at the holding midfielders and think they could easily do it. They think they can easily sit in front of the back four and pass the ball five or 10 yards every time they get it, but it’s a very hard job.

“It’s so hard to not get too involved in the game, to stay patient and to stay in position in front of back four.

“Chelsea have been linked with him, but I don’t know why Arsenal aren’t looking at Declan Rice.

“Arsenal are crying out for a holding midfield player. They don’t need a midfielder who’s going to be on the edge of the opposition box, they need a disciplined defensive midfielder, who is going to sit in front of the back four and organise the side; one who, when he gets the ball, gives it simple with 10-yard passes.

“When you look back at the likes of Roy Keane later in his career and Claude Makelele, they were the best because they never got involved. They just did the simple things.

“It’s so hard to be playing in a football match, playing five or 10-yard passes. Before you know it your mind is telling you to get involved and play 60-yard passes. You want to be involved and start spraying the ball about the pitch, but that’s where the great defensive midfielders just get it and keep it so simple.

“People often say Makelele never scored but that wasn’t his job. It wasn’t Keane’s job either. Their job was to protect the back four and – I’m not going to say give the ball to better players because I don’t agree with that, they were as talented players as the ones going forward – but their job was such an art.

“It’s such a hard job and that’s why I can’t believe Arsenal aren’t going in for a player like Rice.

“A player like Rice can allow the attacking players to flourish and it gives the central defenders the chance to be better than what they are. I don’t care who you are in football, Paolo Maldini, Franco Baresi, Alessandro Costacurta and even a Virgil van Dijk, if you’ve got people running at you left, right and centre every minute, they are going to go past you on occasions.

“That’s where good protection in front of the back four comes into it and every team needs it. There are not too many world-class centre-backs in the world so that makes the defensive midfield position all the more important. For me, a good holding midfielder is priceless.

“Arsenal haven’t really had a disciplined defensive midfielder since Gilberto Silva. Everyone talks about the club never really replacing Patrick Vieira, and of course, but they never replaced Gilberto either.

“There are players in the current team that are meant to do that job but they don’t have the discipline to do it, and that needs addressing.”