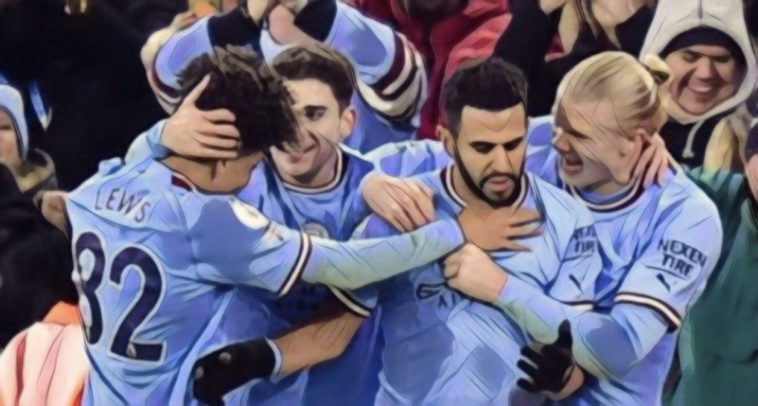 Manchester City got their Premier League title tilt back on track after they secured a dramatic 4-2 comeback win over Spurs at the Etihad tonight.

Spurs poor performances during the opening halves of games this season has been well documented, although Antonio Conte’s side certainly started a lot better at the Etihad tonight than they did in their 2-0 North London Derby defeat to Arsenal at the weekend.

Man City still dominated possession though, but a header onto the roof of the net from Erling Haaland and a deflected effort from youngster Rico Lewis – that Hugo Lloris did well to save – was the closest Pep Guardiola’s side would come to scoring.

Then as the clock ticked towards half-time and what seemed like out of nowhere, Spurs went two nil up. First Spurs press pounced on a poor ball by City ‘keeper Ederson that ended with Dejan Kulusevski firing a confident finish into the bottom corner, before the home sides Brazilian shot-stopper parried a Harry Kane cross/shot onto the head of countryman Emerson Royal who nodded into an empty net to leave the Etihad in stunned silence.

The reigning Premier League champions emerged a different side after the break though and in the 50th minute World Cup winner Julian Alvarez fired home a close-range volley after a goal-mouth scramble.

Just a couple of minutes later and City would be level, Riyad Mahrez did well to win a header and direct the ball across the six yard box where Haaland nodded home for his 22nd top-flight goal of the season.

In the 63rd minute, City’s comeback would be complete, when Mahrez skipped past Ben Davies down the right and smashed a powerful right-footed effort past the much-maligned Lloris at his near post.

In the 88th minute, the impressive Mahrez sealed a man-of-the-match performance when he raced through on goal and confidently dinked the ball over the onrushing Lloris.

City are now five points behind leaders Arsenal – although the Gunners have a game in hand – and speaking afterwards Guardiola admitted his side have to start games better in future.

“We have to prepare better, I cannot deny how happy we are but we are far away from the team that we were,” Guardiola told Sky Sports.

“We gave them the first goal, and then the second goal is ridiculous. There’s nothing from the stomach, from the guts and we were lucky but if we don’t change we will drop points.”

When asked what was missing during City’s first-half display, Guardiola replied:

“Passion, fire and desire to want to win from the first minute. Our fans were silent for 45 minutes.”