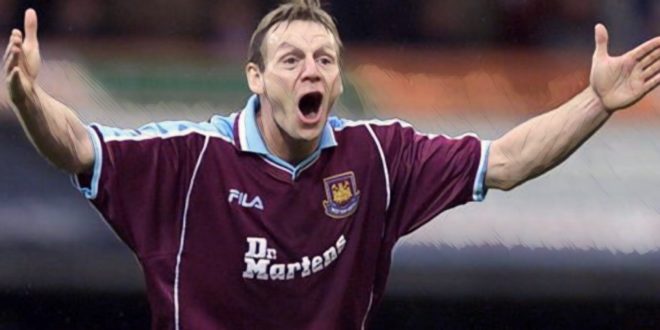 Old but Bold: Five oldest players to be sent off in Premier League history

Harry Diamond 06/04/2020 Five of the Best, Opinion/Features Leave a comment

Any player capable of playing Premier League football well into their late thirties deserves the utmost amount of credit, though these ‘golden oldies’ may not be too pleased with their unwanted place in this particular list.

We’ve decided to look back through the records at the oldest players to be sent off in a Premier League fixture, the most evergreen stars to have been sent for an early bath.

Here are the five oldest players to be sent off in Premier League history:

The former England international enjoyed a long career at the highest level after initially winning promotion to the top tier at Derby, later representing the likes of Charlton, West Ham and Watford at Premier League level.

It would be during the left-backs spell at the latter that he would make this list of veteran violators, sent off during a home defeat to Sheffield United in a miserable campaign for the Hornets – Aidy Boothroyd’s side finishing bottom of the division and suffering relegation to the Championship.

Powell’s second yellow card came late on during a defeat which extended Watford’s run to just one win in 14 league fixtures, a low point in what would prove to be the full-back’s final season at Premier League level.

One of Burnley’s great servants, Duff made 383 appearances in all competitions for the Clarets after signing from Cheltenham Town including winning three promotions to the Premier League.

The ageing centre-back was entering the final seasons of his two decade career ahead of the 2014/15 campaign, but proved a reliable presence in Sean Dyche’s side as they attempted to establish themselves in the top flight.

Duff entered the record books as one of the Premier League’s oldest ever dismissals late in the season, however, earning his marching orders after conceding a penalty for a professional foul on West Ham’s Cheikhou Kouyate.

Burnley later appealed the decision and Duff had his ban rescinded, though his return could not help the club retain their top-flight status as they suffered relegation alongside Queens Park Rangers and Hull.

Wark is regarded as a legend at Ipswich Town after making 679 appearances over three spells, though the midfielder’s career was reaching its conclusion during the opening seasons of the Premier League era.

The Glasgow-born star offered experience as Ipswich battled against relegation during the initial campaigns of the newly-formed league, and it would be during a miserable 1994/95 season that Wark earned his inclusion on this exclusive list.

The fourth-oldest player in Premier League history, Friedel seemingly got better with age during a career in English football that spanned 18 years and four clubs, representing Liverpool, Blackburn, Aston Villa and Tottenham.

It was during a three-year spell at Villa Park that the former US international joined this list of veteran red cards, sent off during a comprehensive defeat at former club Liverpool in March 2009.

Friedel was given his marching orders by referee Martin Atkinson after bringing down Fernando Torres in the penalty area at Anfield, allowing Steven Gerrard to secure his hat-trick from the spot in a 5-0 victory for the hosts.

The goalkeeper later had his red card rescinded on appeal.

The oldest player to receive a red card in Premier League history is none other than England legend Stuart Pearce, a player affectionately nicknamed ‘Psycho’ for his full-blooded commitment and uncompromising approach to the game.

Pearce rose from non-league to spend almost 20 years at the highest level, finishing his career with 78 caps for the Three Lions and over 400 appearances for Nottingham Forest.

During his later career, Pearce headed to West Ham to link up with Harry Redknapp and overcame two leg breaks to establish himself as an important player, winning the club’s Hammer of the Year award in 2001.

That season also saw Pearce become the oldest ever player sent off in a Premier League fixture, receiving two yellow cards in a clash against Everton at Upton Park in March 2001 – aged 38 years and 341 days.