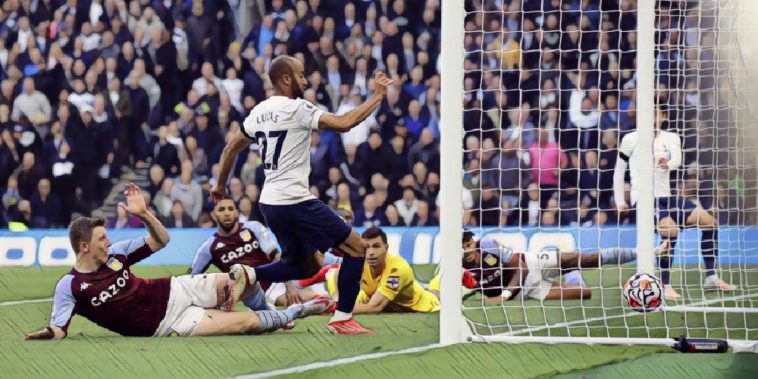 Heung-min Son starred as Tottenham Hotspur ended their recent losing run with a hard-fought 2-1 win at home to Aston Villa on Sunday.

Spurs had gone into the game having suffered three successive defeats in the league, with confidence unsurprisingly low as they made a nervy start against their contrastingly in-form opponents.

As the first-half grew on, however, the home side began to find their rhythm, with midweek hat-trick hero Harry Kane almost breaking his top-flight duck with a speculative, long-range free-kick that so nearly caught out Emi Martinez, only for the Argentine to just about claw it away to safety.

With the game approaching the half hour mark, the breakthrough did eventually come for the hosts through Pierre-Emile Hojberg, the Danish midfielder slotting home with an assured finish into the bottom corner from just outside the box, following a good pick out by Son.

The visitors then had chances of their own either side of half-time, notably through John McGinn’s sweet volleyed effort just before the break, while at the other end Son skewed a close range effort wide after an excellent pull back from Kane.

After what was an even start to the second-half, the visitors levelled the scores on 67 minutes through Ollie Watkins, the forward poking home after Matt Targett’s drilled cross to cap a fine week following his England call-up.

Parity lasted just a matter of minutes, however, as Tottenham struck back after more good work from the ever-dangerous Son, the Korean surging into the box and fizzing the ball across in search of Lucas Moura at the back post, only for a sliding Targett to intervene to turn the ball into his own net.

That proved to be enough to stop the rot for Nuno Espirito Santo’s men as they secured a much needed three points, with the former Wolves boss pleased with his side’s risk taking after last week’s north London derby disappointment.

“Good, good, good,” he told Sky Sports. “We needed a win but a well-deserved win. We did a good match against tough opponents. Important for us, the boys and the fans. We reacted well after conceding and positive in a lot of ways.

“The boys did well. Villa are a very good team with the press so it was about taking risks. Our front three were always in the middle. They played well.”

Santo was pleased with the movement for the opener, as well as the reaction to being pegged back, though was rueful of his side’s wastefulness with their chances.

“Very well done, good movement in possession and a fine finish,” he said.

“Many time we conceded and go flat but this time the team did well. We missed chances to kill the game.

“All the players did well, we have talented players and when they are confident, they are unstoppable.”

The wait does still go on for a first league goal of the season for Harry Kane, although the England striker put in an improved performance against Dean Smith’s side.

“He worked very well for the team. It (the first goal) will come,” he said..

“We are aware we have been through a tough moment. When the players gel and combine they can do very good. We have to find the balance between the defensive and attacking part of the game.

“This is our focus, what can we do to improve?”

With the international break to come next week, Tottenham are next in action away at Newcastle United on Sunday 17 October.