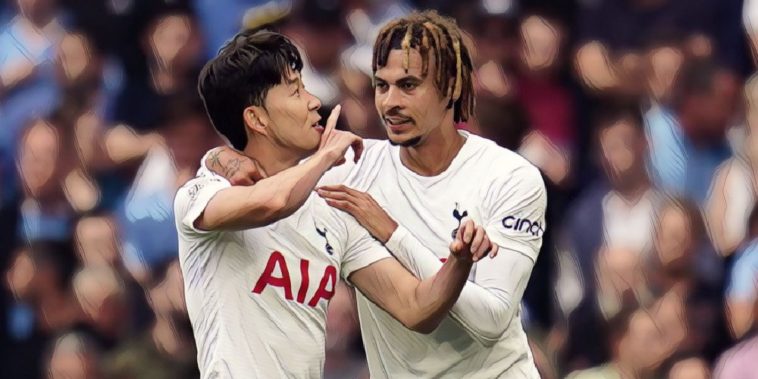 Heung Min Son scored the only goal of the game as Tottenham got their campaign underway with a win over reigning champions, Manchester City.

It was a game that was played under a huge Harry Kane shaped shadow, the Spurs captain having agitated for a move to today’s opponents, who have already seen a £100 million bid turned down and are thought to be preparing a new bid.

Having only just returned to training this week, Kane was left out of the matchday squad, officially due to his lack of fitness, and it will be interesting to see if he is restored for their midweek fixture against Paços de Ferreira.

As for the match itself, City started by far the brighter of the two sides, with Jack Grealish and Raheem Sterling a particular threat down the left, Spurs’ Japhet Tanganga tasked with nullifying the English pair.

Spurs did however start to get a foothold as the first half wore on, Lucas Moura seeing a shot blocked almost on the line by Ilkay Gundogan, while Heung Min Son saw a curling effort deflected wide.

The north London side had looked threatening on the break throughout the first period, and it was through a counter that the game’s opening goal would come 10 minutes after the restart. Steven Bergwijn drove into the Man City half before laying it off to Son on the right, who cut inside and curled a left-footed effort into the bottom corner from just outside the box.

Bergwijn squandered a chance to make it two shortly afterwards, the Dutchman capitalising on a loose ball only for his first touch to take it away from him slightly before he put his effort wide.

While Man City had by far the most effort on goal, only four of them would be on target, with Spurs putting in a resilient defensive display to claim a fourth successive victory and clean sheet over Pep Guardiola’s side at the Tottenham Hotspur stadium.

Speaking after the game, Nuno Espirito Santo praised Spurs’ effort and discipline as he got his tenure at the club off to a perfect start.

“It was good I think. The atmosphere was special off [the back of] the hard work of the boys. They make any crowd proud when they work so hard,” he told Sky Sports.

“It was strong. We were lucky because they had chances but the boys held on and they stayed in the game. We knew it would be tough. After that first 20 minutes we did better and we started getting our chances. In the first half we didn’t finish so good. When we should have [taken a] shot on goal we didn’t do it.

“Not only him [Japhet Tanganga]. In terms of shape and our organisation the front three worked very hard and closed the gaps. It’s very difficult to play against City with the way they build the first moment. It requires a lot of discipline so the boys did okay.

“I’m sure that with commitment and the talent we have, we will be a good team. We are in the process of that. I am learning every day and I am very proud of them today, very proud.”

The crowd at the Tottenham Hotspur stadium burst into a rendition of ‘Are you watching Harry Kane’ in a message to their wantaway striker, though the Portuguese was once again asked about his future.

“Look, Harry Kane is one of the best players in the world, honestly. We are very lucky to have him. He has to get ready and help the team. We still have to go to Portugal then we think about Wolves.”