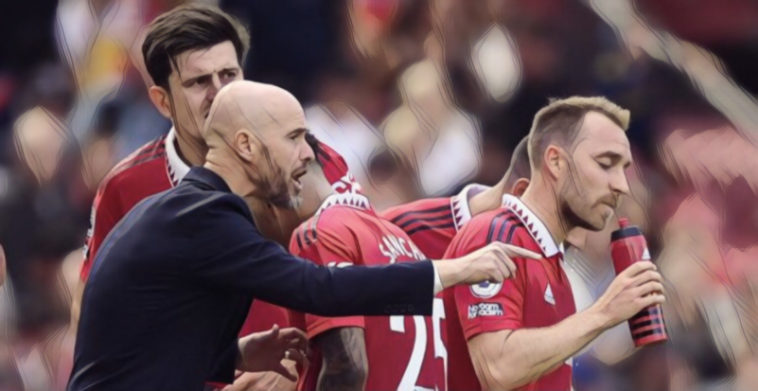 Manchester United’s Erik Ten Hag era got off to a poor start with the Old Trafford outfit deservedly losing 2-1 at home to Brighton today.

The game looked like an open affair right from the off with both sides leaving plenty of space all over the park. Man United would almost take the lead after just six minutes, but Portuguese playmaker Bruno Fernandes blasted high and wide after he was handed an excellent opportunity from 12 yards out.

Brighton striker Danny Welbeck was causing United’s centre-backs all sorts of problems with his movement and just before the half-hour mark the Seagulls would take the lead through that very avenue. The former United academy graduate was slipped in behind the home defence down the left before his cutback was coolly slotted home at the back stick by Pascal Gross.

Graeme Potter’s impressive side began to dominate both tactically and technically and on 38 minutes they would deservedly go two up. German midfielder Gross once again arrived at the back post to stroke home, this time after a flowing team move from deep inside their own half.

Five minutes after the break Ten Hag would be forced to turn to want-away attacker Cristiano Ronaldo and United did look more of a threat after previously playing with Christian Eriksen as a false nine.

United still lacked fluidity though and continued to make embarrassing errors in possession, although Marcus Rashford twice went close to scoring after finding himself on the end of crosses from the right.

On 68 minutes the Old Trafford faithful were finally given something to shout about when a mistake by Brighton goalkeeper Robert Sanchez from a corner ended up with Alexis Mac Allister scuffing the ball into his own net.

Diogo Dalot stung the palms of Sanchez soon after and as the home crowd got behind their side it seemed like Ten Hag’s side could go on at the very least find an equaliser. However, Potter’s men used their intelligence to take the wind out of United’s sails and when Paul Tierney blew the final whistle after five minutes of injury time it was Brighton who ended the game in complete control.

Speaking afterwards United skipper Harry Maguire admitted his side didn’t do enough to get a result.

“We went into the game positive, we had a good pre-season and it was the worst possible start to be 2-0 down at half-time at Old Trafford. Not good enough,” Maguire told Sky Sports. ”We got a goal back but we huffed and puffed a bit and it’s a bad start for us.

“We started pretty the game well and on the front foot and as a team we had control of the game. Then we conceded the first goal and that knocked us badly. We stopped playing from then. We need to look at not letting that first goal set us back as much as it did. But we have to be better on the ball, we gave them encouragement to come forward and attack us. It was a nightmare start to be 2-0 down at half-time.

“We spoke about getting the next goal [at half-time]. I think in the second half you saw good parts to our game but overall we didn’t do enough. We had a lot of pressure and a lot of ball but we need to be a bit more creative and we need to improve on that

“It’s something we need to address or it’ll keep happening. The first goal felt like a big blow to all 11 of our players.

“It’s great to have Lisandro Martinez at the club. We have competition for places at centre-back. We’ve not played much together and in that first period we weren’t on the same wavelength. Centre-back partnerships are built over time and we will get a lot better and keep clean sheets.

“Everyone knew the task. We had a bad season last season. We’ve got a new manager trying to put his philosophy on the team but when we don’t get it right we look far too open.”

Next up for United is an away trip to face Brentford next Saturday evening.