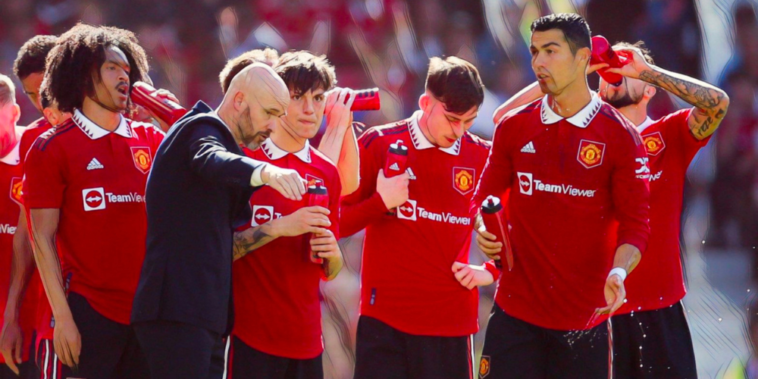 The Premier League is back! After a summer spent attempting to fill our time with alternative hobbies and interests, the entertainment of England’s top tier makes its return this weekend.

After a long wait, we’re back with our Premier League talking points ahead of the weekend’s action.

Friday night football a chance for Arsenal to show progress

For the second successive season, Arsenal will take part in the Premier League’s curtain-raiser. Last season’s opener proved a disaster however, with the Gunners well-beaten at Brentford as Mikel Arteta’s team felt the sting of the newly-promoted Bees.

The north Londoners will begin the new campaign in similar circumstances, with another Friday night fixture and short trip across the capital to face Crystal Palace.

The wait is over. pic.twitter.com/oHrBDmNk5I

Arsenal recovered from a shaky start last season to show signs of progress and will be confident of challenging for a top four finish this season. However, a dismal defeat at Palace last season was the start of their Champions League chase unraveling and a trip to an atmospheric Selhurst Park will pose a challenge for any side in the division.

Ex-Arsenal captain Patrick Vieira will also be in no mood to do his old side a favour, as the Frenchman looks to continue the Eagles’ upward momentum from last season.

Nunez raring to go for Liverpool

After a pre-season campaign in which the social media vultures circled swiftly, Darwin Nunez issued a response with a fine cameo off the bench in the Community Shield.

Four goals in a friendly with RB Leipzig had demonstrated those keen to criticise were perhaps premature, before a superb showing – and goal – against Manchester City last week provided a glimpse of what the forward will offer Liverpool this season.

The ease with which Nunez appeared to adapt to the Reds forward line will have pleased Jurgen Klopp, who will be tempted to throw the 23-year-old in from the off as Liverpool travel to Fulham.

Nunez’s arrival has added a new profile to Liverpool’s front three and the club’s fans will be eager to see what the Uruguayan can do in a new-look forward line alongside Luis Diaz and Mohamed Salah.

Forest back in the big time

For the first time this century, Nottingham Forest will begin the season as a Premier League club. Steve Cooper’s arrival last season awoke one of English football’s sleeping giants and Forest will be relishing their first taste of top-flight action since the late nineties.

Cooper is fast developing a reputation as of the most promising coaches outside the ‘big six’ and has been busy in the summer window, bringing in proven Premier League experience in Jesse Lingard and Dean Henderson, alongside the club-record arrival of Taiwo Awoniyi from Union Berlin.

"We're certainly not fearing it!" 💪

Nottingham Forest boss Steve Cooper says his sides opening game of the season against Newcastle is the 'perfect example' of what the Premier League is. 🌳🔴 #NFFC pic.twitter.com/WKhYsI5dT1

Forest have made 12 additions already this summer and Cooper has promised more before the deadline, though the task will now be ensuring a wealth of new arrivals can gel quickly.

Cooper’s side travel to face Newcastle in their opening fixture and Forest will be hoping momentum can lead to a positive start of the season. The club were bottom of the Championship at the time of the 42-year-old’s arrival in late September, before a run of results snowballed into Premier League promotion.

Antonio Conte has been granted his wish of reinforcements this summer, with Spurs having made six new signings to strengthen the squad in key areas.

The most expensive of those has been the £50m arrival of Richarlison from Everton and while the Brazil international increases the options available to Conte, there appears no immediate fit for the 25-year-old in the first XI.

Richarlison has featured predominantly from the left or centrally for Everton, though the presence of Son Heung-Min and Harry Kane mean those roles are occupied. While capable from the right, Dejan Kulusevki excelled alongside Son and Kane during the closing stages of last season and his exclusion would be harsh given his impact.

The marquee summer arrival might be forced to bide his time before earning a place in Spurs’ starting side.

Last season’s leading scorer has left with Richarlison sold to balance the books, while Dominic Calvert-Lewin is facing six weeks on the sidelines with a knee problem.

Salomon Rondon has underwhelmed since arriving at Everton, but even his absence through suspension will be felt as the Toffees kick off the campaign against Chelsea without a recognised forward.

Can Dele Alli get back to his best at Everton? 🤔 pic.twitter.com/Q9ECSBwVo5

Dele Alli could be tasked with leading the line, as Lampard looks to revive the fortunes of a footballer whose career has nosedived. The 26-year-old has operated in an advanced role in pre-season and there will be many who still hope the midfielder can find the form which saw him emerge as one of the Premier League’s best young talents at Tottenham.

Lampard looks willing to gamble on Alli, whose career record of five goals in nine league appearances against Chelsea will provide cautious optimism ahead of this weekend’s opener.

Brendan Rodgers’ summer has not gone to plan so far, with Leicester the only team in the Premier League not to have made a signing.

Rodgers has hinted that sales are required before strengthening, but the Foxes boss will not have welcomed big-money bids for James Maddison and Wesley Fofana in the days before the club’s opening fixture.

Youri Tielemans has also entered the final 12 months of his contract, while Kasper Schmeichel was allowed to leave this week to sign for Nice. With Jamie Vardy also another year older, the core of the side that narrowly missed out on Champions League football in 2020 and 2021 is in danger of being broken up.

Having failed to mount a challenge for European football last season, Rodgers is facing arguably the most difficult period of his reign so far as he looks to keep the Foxes competitive at the top end of the division.

Erik ten Hag has impressed during the opening weeks of his tenure as Manchester United manager. From immediately jumping into the role without a summer break, to the soundbites over the direction he wants to take the side, the signs at surface level have been good.

Ten Hag’s task has not been made easier by the sideshow surrounding Cristiano Ronaldo’s future however, who has made clear in no uncertain terms that he wants out.

Ten Hag belives Ronaldo needs a lot of training before the start of the season 👀 pic.twitter.com/6Z6usaFPU1

With the club’s star attraction having thrown his toys out the pram, Ten Hag faces a major decision on whether to include Ronaldo – short of match fitness after missing the club’s pre-season tour – for this weekend’s opener with Brighton.

Ten Hag was critical of Ronaldo, alongside other squad members, for leaving the club’s friendly with Rayo Vallecano before the full-time whistle last weekend and the Dutchman appears unlikely to easily accept Ronaldo’s disruption of his first pre-season.

However, Anthony Martial’s hamstring injury has left the Red Devils short of options at centre-forward and a winning start is of paramount importance to the new boss.

All eyes on Haaland

Erling Haaland has sent an ominous warning to Premier League defences, outlining his intention to get better and better at Manchester City.

“(I can improve) everything. If you think I’m good at one thing, I can always get better,” he told Sky Sports this week.

“This is something I have to do. As a young player, playing for Pep Guardiola, playing for the best club in England, I have to keep developing and get better at a lot of things.”

City’s capture of the Norwegian has been the statement signing of the summer window, with Haaland having scored at a staggering rate for Red Bull Salzburg and Borussia Dortmund.

The 22-year-old will now be tasked with leading City’s title defence and despite an underwhelming performance in the Community Shield last weekend, will be ready to make an immediate impact at West Ham this weekend.