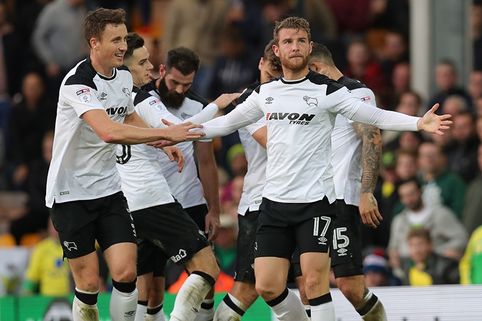 Norwich City’s eight game unbeaten league run was ended in their own backyard by a Derby side who are now starting to gain a bit of momentum after a slow start to the campaign.

The Canaries looked the better side for the majority of the opening 45 minutes, with Scott Carson having to prevent Christoph Zimmermann giving the home side an early goal, before teammate Marco Stiepermann saw his shot rebound off the crossbar.

Daniel Farke’s men continued to push and thought they should’ve had a penalty before half time when Scott Carson brought down Josh Murphy inside the box, but referee Peter Bankes thought differently and gave a corner.

Not long after the penalty shout, Richard Keogh played a great long ball from his own half to find David Nugent on the edge of the Norwich box, whose touch and shot was perfectly executed, putting The Rams 1-0 going in at the break.

Tom Huddlestone came close to doubling the lead shortly after half time, his volley had to be tipped over the bar by Man City loanee Angus Gunn in the Canaries goal, to deny the away side a second.

Marco Stiepermann – who had been a thorn in the side for Derby all afternoon – then had a good chance to level the tie but was denied by Carson, before he crossed to the back post to find Timm Klose who nodded home the equaliser Norwich had been pushing for.

Both sides went on to push for a winning goal, and as full time drew closer the Norwich legs grew tired, having played 120 minutes away to Arsenal in the League Cup midweek. Chris Martin received the ball inside the box and laid it off to fellow ex-Norwich man Bradley Johnson, whose shot rebounded to Sam Winnall, and with Angus Gunn off his line the striker couldn’t miss, bagging his second Rams goal.

The 2-1 win means Derby leapfrog their opponents and move up to 7th in the Championship table. It was just their second win on the road this season, whilst it was Norwich’s first league defeat since August. Up next for Daniel Farke’s side is another difficult home game, this time against Wolves. Meanwhile Gary Rowett takes his men to Elland Road to face Leeds United.