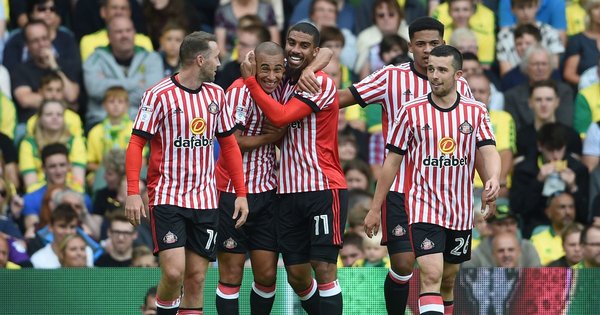 Sunderland made the long journey to East Anglia for the Sunday game against Thomas Farke’s Norwich.

The Canaries had only lost once at Carrow Road in 2017, against Slavisa Jokanovic’s Fulham back in April. Sunderland on the other hand had only won two away league games in 2017 both to Crystal Palace and Hull City.  Simom Grayson stayed faithful to Jason Steele as the Newton Aycliffe born goalkeeper started his fourth consecutive game for the black cats.

Norwich enjoyed most of the possession but never really threatened Steele’s goal in the first half, a Cameron Jerome potshot was about as close as they got before striker Lewis Grabban shook off a defender before thrashing a shot at Gunn’s goal only to hit the side netting. Cameron Jerome did put the ball in the net after a ball from Naismith but the former Birmingham City striker was judged to be offside.

The next time the ball would end up in the net was shortly after when a long kick by Steele was flicked on by Vaughan for strike partner Lewis Grabban finished from just inside the area first time through Angus Gunn’s legs.

Sunderland really grew into the game and although Norwich enjoyed most of the possession it was the Wearsiders who created the chances; Lee Cattermole played a free kick into the area which caught the Canaries’ defence off guard only for the ball to be inches in front of winger George Honeyman.

Norwich came reasonably close with half chances from set pieces, first Cameron Jerome’s header just wide of the helpless Steele then captain Russell Martin’s diving header from the corner although if he’d left it it was falling for the unmarked Jerome.

George Honeyman’s corner didn’t cause problems but the headed clearance was brought down by the skipper to Aiden McGeady who unleashed an absolute peach of shot into the top right corner to double the visitors’ lead. 10 minutes later Lewis Grabban nodded in from 4 yards from a delightful McGeady cross after the man of the moment was unmarked at the far post.

Norwich then got a goal back after Oliviera won a free kick which was whipped in knocked across goal, past the goalkeeper Steele and the last touch came off Grabban in the goalmouth scramble. James Husband then forced Steele into a double save making the former Boro stopper dive to his left before Martin leathered a shot at goal for Steele to stop it again.

Sunderland pick up their first 3 points of their Championship campaign, with a overall happy return to his former stomping ground for on loan Bournemouth striker Lewis Grabban. Norwich hope to follow in the footsteps of Huddersfield Town who last season were promoted after appointing Borussia Dortmund’s youth team manager David Wagner, this season the Canaries replaced Alex Neil with former Dortmund youth team boss Thomas Farke in hope of similar success but it was English gaffer Grayson who came out the victor.