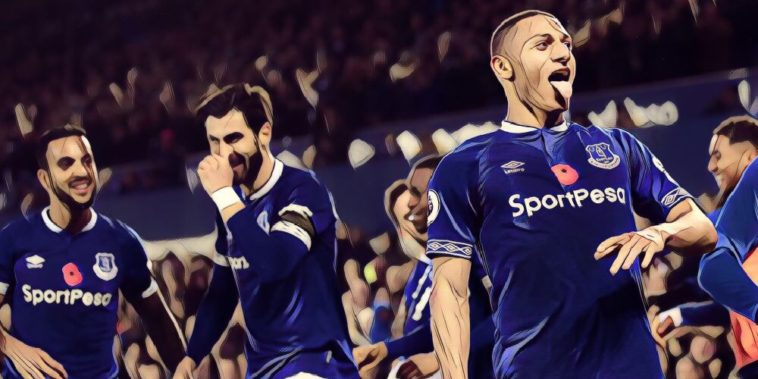 Everton forward Richarlison has been earning plenty of plaudits for his performances in the Premier League this season and has now been praised by the most expensive player in the world, Neymar.

There were a number of eyebrows raised when Everton agreed to shell out £40 million for the Brazilian after he only managed to score only five league goals for Watford last season in what was his debut Premier League campaign.

However, with just 12 games of the campaign gone, he has already scored more than he did during the whole of last season, scoring six goals in his first 10 Premier League appearances for the Toffees.

His form for the Blues saw him earn his first call-up to the Brazil international squad during the last break, netting a brace on his full debut for the Seleção in a 5-0 win over El Salvador.

The 21-year-old has retained his place within coach Tite’s squad for the upcoming friendlies against Uruguay (at Arsenal’s Emirates stadium tonight) and Cameroon (in Milton Keynes) on Tuesday, and speaking ahead of those games, £200m man Neymar has described the former Watford winger as ‘a great player’:

“Everyone knows Richarlison is a great player and a really nice guy,” Neymar told the press on Thursday.

“He has the ability to change matches and perform in big games, as we are now seeing at Everton. I expect him to keep maturing and developing as his career moves forward.”