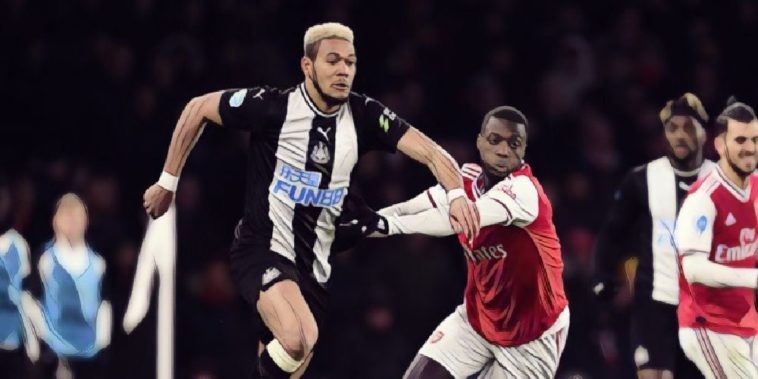 Steve Bruce has called on Joelinton to be ‘more selfish’ in front of goal following the Newcastle forward’s difficult debut campaign.

The club-record signing has struggled since arriving at St James’ Park from Hoffenheim last summer, scoring just once in the Premier League – against Tottenham way back in August.

The Brazilian has failed to find the net in his past 23 matches and has drawn fierce criticism from supporters, though ahead of this weekend’s trip to Crystal Palace, Newcastle boss Bruce has backed the 23-year-old to ‘come good’.

“As always we’ve done as much as we possibly can,” Bruce said at his pre-match press conference. “You can put on as many finishing drills and training ground exercises as much as you want. Unfortunately, Joe will be measured by one thing – goals.

“I have to say his team play, his work rate and attitude [is good]. With that I’m sure he will come good, he’s still only 23.”

Bruce admits that the forward’s first season in English football has proven difficult, though says the club are ‘convinced’ by Joelinton’s talents as they bid to help him rediscover his best form.

“The only thing we can do is try and keep encouraging him, he’s had a sharp learning curve,” Bruce added.

“For all of them it is easy in training, there’s no pressure and that’s what they do everyday. We know that there is a talent there and the kid has a heart as big as himself. We hope he can score a few more.

“He’ll learn from what has been a difficult first half of the season for him. As long has he keeps working hard and shows the right attitude, we are convinced that we have a player in there.

“He might not be a natural goalscorer, that’s the key. He has to be a bit more selfish and think about scoring goals.

“He will be desperate to play tomorrow even though he has a niggling thigh injury. He does not shirk anything and for that you hope he comes good.”