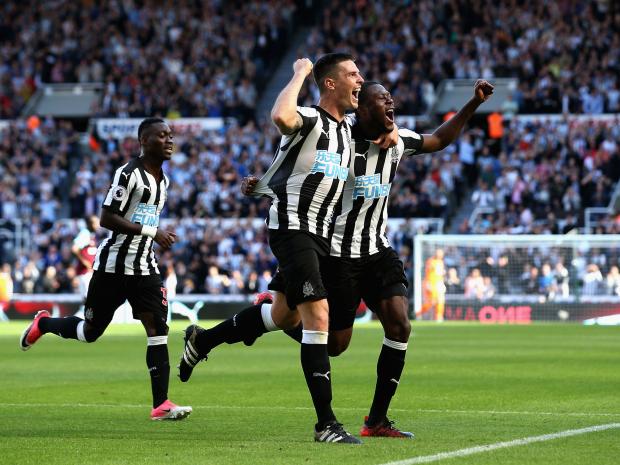 Newcastle end their search for points and a goal with 3-0 win at St James Park.

This was Newcastle’s third competitive test at home this season and it produced their first positive result of the year. After the EFL Cup fixtures in mid week West Ham came into the game with confidence after a win compared to Newcastle who lost.

The game started and Newcastle started as always, with a good defensive shape and good structure in transition from attack to defence. West Ham had the possession at the start and throughout the game. The first talking point of the game was when the forth official called over the referee to award a yellow card in the 17th minute to Chicharito. This was for clattering into his opponent late. The forth official made a good call on review, this is a rare thing to see all officials being used to manage the game.

In the 36th minute, Newcastle scored their first goal of the season. Declan Rice was dispossessed in midfield very easily. Merino played an inch perfect ball through to Atsu who cleverly drew Hart to his near post. Then, he squared it to new signing Joselu who put it in the empty net.

This was the last action of a Newcastle dominated first half. The Magpies looked comfortable in the first half  and fully deserved to be leading at the break. The second half got under way with Lanzini replacing Rice. This was no surprise as he was at fault for the mistake that lead to the goal.

Chicharito got lucky getting away with another reckless challenge. At this stage West Ham were staring to get into the game. Newcastle had a chance to make it two when they had a four on two. Zabaleta made a good clearance to stop a certain goal.

In the 72nd minute Matt Richie put a good ball in to back post. Clark was up from a free kick and got his head onto the ball and direct it onto the inside of the post. Unstoppable. Another good goal adding to Newcastle’s stable lead.

Ritchie continued to work hard even after Newcastle were dominating West Ham. This shows a good attitude in the squad. After the second goal, Newcastle started to play with confidence for the first time this season.

In the 86th minute, Newcastle sealed the three points. Ritchie played Mitrovic through. He was one on one with Hart. The Serbian rounded Hart with ease and put the ball into the open net. This showed Newcastle’s confidence today as they continued to attack instead of defending their position. This is the mentality they need this season.

It was now just a formality. The clock ticked over and full time soon came. The first victory for Newcastle since their return to the league. A third strait defeat for West Ham this season.

The big difference in this game was the amount of mistakes West Ham made. Newcastle dominated with out these but West Ham could do nothing with a large amount of the ball. The two teams were also separated by their setup. Newcastle had structure at the back were as West Ham looked disorganised.

Rafa Benitez also fired up Newcastle today. After a disappointing loss in the cup, Benitez inspired the lads to work hard for the shirt and to fight for one another. Benitez has never lost three matches in a row in the Premier League, which was continued today.

Check out the Five things we Learned from this encounter.