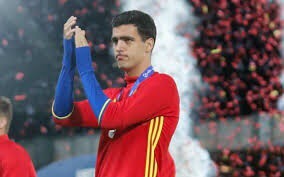 Newcastle are set to announce the loan-deal of 21-year-old Mikel Merino from Borussia Dortmund with a rumoured option to buy for £4 million at the end of the season.

Merino has undergone a medical on Tyneside and is expected to sign for the club later today.

Merino is a defensive midfielder who is known for his composure on the ball, passing ability and naturally his defensive work. However, he is also comfortable as a centre-back and has played there numerous times as a sub for the German side.

The Spaniard signed for Borussia Dortmund from Osasuna in July 2016 following the Spanish clubs promotion to La Liga. He scored six goals in 35 games in their promotion season and won player of the month in his last month in Spain.

He was also part of the Spain under-19 team which won the 2015 UEFA European Championship in Greece. As he scored his only goal for the side in their opening 3–0 win over holders Germany.

Below you can find a compilation of what Newcastle can expect from their new man.

It will be interesting to see where Merino fits in at Newcastle with both Isaac Hayden and Jonjo Shelvey being fan favorites in his position.