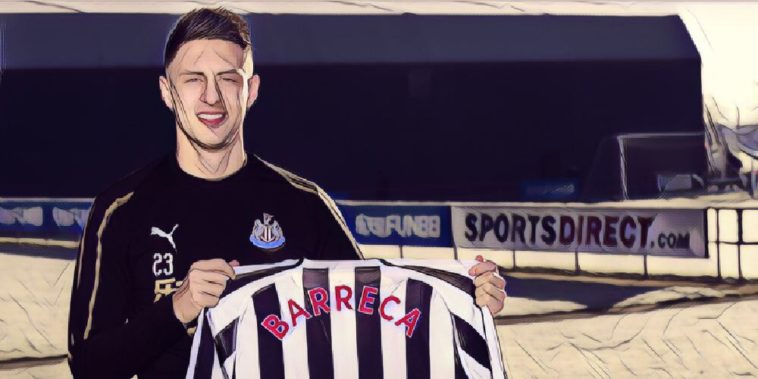 Newcastle United have completed the loan signing of Antonio Barreca on a season-long loan from AS Monaco the club have confirmed.

Rafael Benitez has been desperate to bring a new left-back to the club, with Paul Dummett the only real option in the position.

They tried and failed to sign Romelu Lukaku’s brother Jordan, but despite the player arriving on Tyneside for a medical last week, the Magpies were forced to pull out of the deal.

However, Benitez now has his man, bringing in Italian full-back Antonio Barreca on a season-long loan, which is thought to include an option to buy for around £9 million in the summer.

Speaking to NUFC TV, the 23-year-old said he can’t wait to get started with his new teammates.

“I am very happy to be here. I have accepted this challenge with a great deal of enthusiasm and I can’t wait to start.

“I know that Newcastle is a big and historic club. I know that the people here really love football and that the fans are really behind the team. I think that the Premier League is the best league, so for me this is further motivation to do well.”

Barreca only moved to Monaco last summer from his hometown team, Torino, but made just nine appearances for the principality club.

? You can watch Antonio Barreca's first interview as a Newcastle United player on NUFC TV now.

Newcastle fans are also eagerly awaiting the news that the club have finally broken their long-standing transfer record with the arrival of Miguel Almiron, who is expected to complete a £21 million move from Atlanta United today.