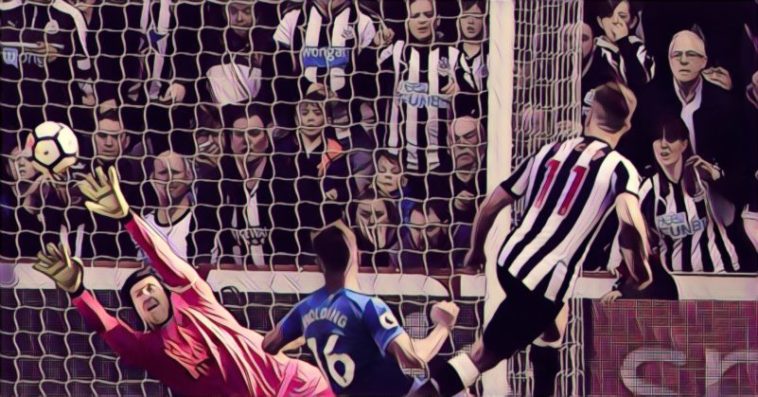 Newcastle continued their superb recent home form with a 2-1 victory over Arsenal today at St.James Park.

The Geordies have now pretty much guaranteed their Premier League survival, and have moved up to an impressive 10th position in the table.

Arsenal on the other hand continued their abysmal away form this season, with Arsene Wenger’s men putting in another insipid display today. The Gunners now face a battle just to finish sixth, with Burnley now only two points behind them.

Let’s see how the players rated ….

Has been a revelation since signing in January, and produced another commanding display today.

Had his hands full up against Aubameyang, but stuck to his task well and assisted his sides equaliser with a decent ball into the box.

Marshalled his defence brilliantly yet again.

Defended well and showed his ability in possession with a couple of superb long balls.

Not the most talented player, but he makes up for it by always working tirelessly for his team.

Was quiet for most of the game, but he took his goal and Newcastle’s winner brilliantly.

Put in a huge shift in the centre of the park. Continuously broke up play and showed great defensive discipline all afternoon.

Superb. On his day there are few better passers of the ball in the Premier League.

Continues to impress with his top class displays on the left wing. Will not be short of offers this summer when his loan from Chelsea expires.

Took his goal brilliantly and assisted the winner.

Worked his socks off up front and his movement caused the Gunners all sorts of problems.

Really impressive cameo by the striker. Great header in build up to Ritchies goal and his introduction played a big part in Newcastle winning the game.

A shadow of the brilliant ‘keeper he was at Chelsea. Cech of five years ago would have saved Newcastles equaliser, which seems to be true of a lot the goals he now concedes.

Belongs in the Championship.

Great through ball in building up to the opening goal, but he looked defensively suspect for large parts of the game

Just not good enough for a club like Arsenal.

One of the few Arsenal players that can hold their head high after todays game.

Outclassed by Shelvey and Diane.

Offers nothing except the ability to pass the ball sideways.

Frustrating. So often does brilliantly to get in dangerous positions before losing his composure completely.

Arsene Wenger said before the game that he can tell after one game whether a player belongs at this level, on this evidence sadly for the 18-year-old, he definitely does not.

Looked dangerous on the left wing in the first period and provided an excellent assist for his sides goal. Went AWOL in the second period however.

Took his goal well, although he did little else of note all day.

Tired his hardest to make an impact, but just couldn’t get into the game.