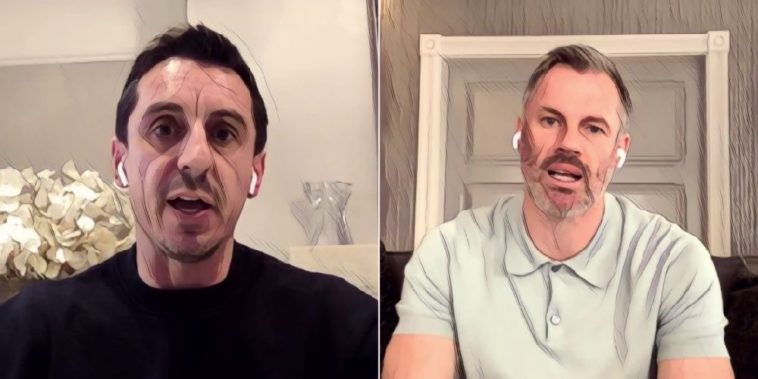 Gary Neville and Jamie Carragher have discussed the possibility of Premier League relegation being decided by a points-per-game system, with neither believing it to be fair.

The conclusion of the Premier League season remains uncertain at present with football currently suspended indefinitely amid the ongoing pandemic, though talks are continuing over a safe return to action behind-closed-doors with the government having provisionally given the green light for professional sport to resume from June 1.

Any return for the Premier League is dependent on the numbers of coronavirus cases continuing to fall over the coming weeks, however, and several proposals have been considered should the season be unable to be completed.

League One and League Two are expected to be cancelled in the coming days due to the cost of finishing the season behind closed doors, with the final standings in both divisions potentially being decided on a points-per-game basis, using a weighted method that would factor in home and away records and the remaining fixtures of each side.

Should this method be applied to England’s top tier, points-per-game would see Bournemouth, Aston Villa and Norwich relegated, whereas the weighted basis would see West Ham replace Bournemouth in the bottom three.

Sky Sports’ pundits Neville and Carragher have now discussed such an eventuality, with former Man Utd right-back Neville insisting relegations based on a points-per-game system simply ‘doesn’t feel right’, with almost a quarter of the season still remaining.

“I don’t believe relegation is fair on the points-per-game basis,” Neville said on Tuesday’s The Football Show.

“I think that if football was going to be played, it’s right for football to be played for promotion and relegation. But I think on the points-per-game basis, to be relegated with nine games to go, with so much to play for, so tight at the bottom and with so much at stake, it doesn’t feel right to me personally.

🗣"Players safety is more important than money"@Carra23 on the Premier League returning pic.twitter.com/rE9W4JBnGw

“I think it feels unfair. What we’ve seen in the last couple of weeks has been quite unsavoury. Clubs have been demonstrating their self-interest to try and jostle for positions. But the big six and the powerhouses at the top will always be able to have that thumb pressed down on the others somehow, because they do carry the weight.

“I do think it’s unfair for points per game for relegation. It’s important I voice that. It’s devastating going down at any time, but without even having the opportunity to defend yourself and play football matches would be too much.”

Carragher agreed with his colleague’s statements and believes relegation is now the ‘main issue’ when assessing how to finish the current season.

The former Liverpool defender believes the league’s struggling sides have acted in their own interests in recent weeks amid ‘Project Restart’ discussions, and believes that teams would soon ‘find a way to play’ their remaining fixtures amid the prospect of points-per-game deciding who goes down.

“Relegation is now the main issue,” Carragher said. “Some countries have decided that the leagues will remain as they are. If League One and League Two are cancelled and promotions and relegations go up through the leagues, it means either three have to go up to the Premier League or three have to go down.

“We don’t want any obstacles put in the way of completing the Premier League and if teams are to go down, they will find a way to play to avoid points-per-game.”