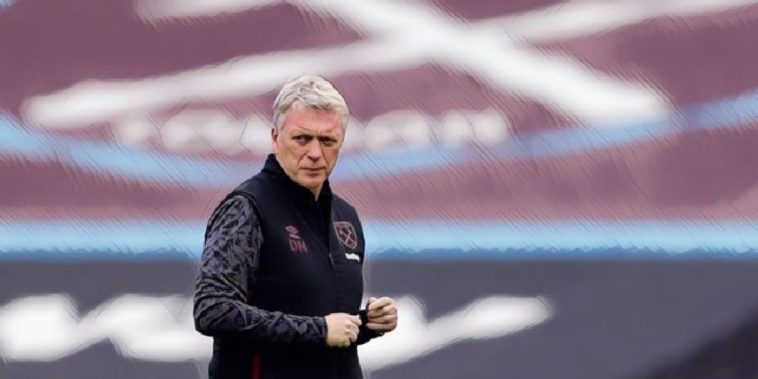 David Moyes has questioned the Premier League’s integrity amid Manchester United’s fixture pile up and the race to secure Champions League football.

West Ham are amongst a clutch of clubs contesting to secure a top four finish this season following an impressive campaign at the London Stadium, though suffered a setback after losing 1-0 at home to Everton on Sunday.

The next week shapes as a pivotal one in the race to secure Champions League qualification, with top four hopefuls Leicester and Liverpool both travelling to face Manchester United in midweek.

The two fixtures come in close succession with the latter having been rearranged following an initial postponement, and Moyes has questioned the fairness of West Ham’s top four rivals potentially playing against a rotated Red Devils team.

Moyes has criticised the scheduling of the clashes on Tuesday and Thursday and has questioned the integrity of the competition as the race for a top four finish heats up.

Speaking at his post-match press conference, Moyes said: “It was really interesting when we were coming back (from the coronavirus lockdown), a lot was made about integrity.

“Ole can do what he likes with his team, but I don’t know if there was a better way to sort the fixtures out.

“Manchester United can always put out a strong team.”

Manchester United manager Ole Gunnar Solskjaer has already suggested he will rotate his options for one of the midweek fixtures, with the Red Devils having been scheduled to play four times within a week.

United faced Roma in the Europa League semi-finals on Thursday before a Premier League meeting at Aston Villa on Sunday, the clashes with Leicester and Liverpool set to take the club to four fixtures in just eight days.

“Three games in five days, very very difficult, almost impossible. Four games in eight, it is impossible. But I think you all know me, I hope you do anyway. We’ll take the challenge head on.

“There might be someone not happy with my team selection for one game or two games. That might affect whoever gets into the fourth position or the Champions League. That’s not my problem. That’s everyone else’s problem.”

Asked if the rescheduling of the United versus Liverpool fixture raises integrity issues, Moyes replied: “The Premier League should be answering these questions.”

The Scot also discussed his side’s hopes of securing Champions League qualification and admitted the defeat to Everton leaves their chances in serious doubt, though says the Hammers will continue ‘fighting’ as they bid to secure a place amongst Europe’s elite.

“Our chances of the Champions League are looking slim, but we’ll keep fighting.

“I’d set my target and I knew where we had to go, and defeat might be costly for us but you never know in football, we might be saying something different in time.”