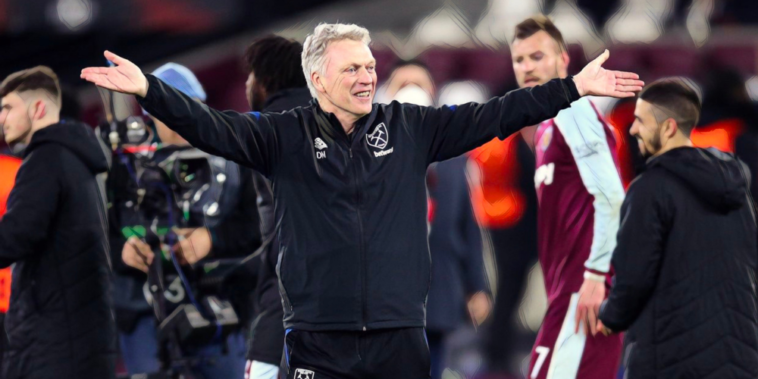 David Moyes says he was not surprised by West Ham’s 2-0 win over Sevilla and has discussed his side’s ‘important’ clash with Tottenham this weekend.

West Ham moved into the quarter-finals with a 2-0 win over Sevilla after extra time on Thursday, goals from Tomas Soucek and Andriy Yarmolenko eliminating the record six-time winners at the London Stadium.

Moyes insists he was not surprised to see his side beat the Spaniards and hopes the Hammers can take that momentum into this weekend’s London derby with Spurs.

“I wasn’t surprised about us getting the result last night because I felt we could do it, against a really good, experienced team,” he told his pre-match press conference.

“We have to just take Sunday like any other game and the importance of it.”

West Ham will have little turnaround ahead of the clash with Spurs after playing 120 minutes on Thursday evening, but Moyes is confident his ‘resilient’ squad can regroup ahead of a challenging contest.

“We’re a resilient group of players and we hope that we’ll all be fine and we’ll go again.

“I think an extra day would help anybody, but we’re pleased we’re in the Europa League and that we’ve qualified. I’d have taken that any day and now we’ll get ready for the Tottenham game.”

West Ham and Tottenham are level on points in the Premier League at present, with the Hammers ahead on goal difference having played a game more.

Both sides are seeking European qualification through league finish this season and Moyes insists the Premier League remains his side’s ‘bread and butter’ despite their European exploits.

“They’re all important, whether it is a team at the bottom or the top. It’s a derby for West Ham and Tottenham, so we know it’ll be a difficult game.

“Where you finish in the league gets you the chance to qualify for Europe. It’s your bread and butter as far as I’m concerned.

“Being in Cup competitions adds to what we’re trying to do and teaches us how to make strides forward.

“At the moment, we’ve got a big game coming up – it’s a hard game – and we know we’re going to be tested to the maximum.”

Moyes admitted his side have a few doubts ahead of the game with Spurs after Thursday’s win, revealing a number of players will be assessed before Sunday’s showdown.

“We have a few limping but you expect that after a tough game.

“We’ll assess them and see how they are. It’s a bit early to know a lot about the team.”