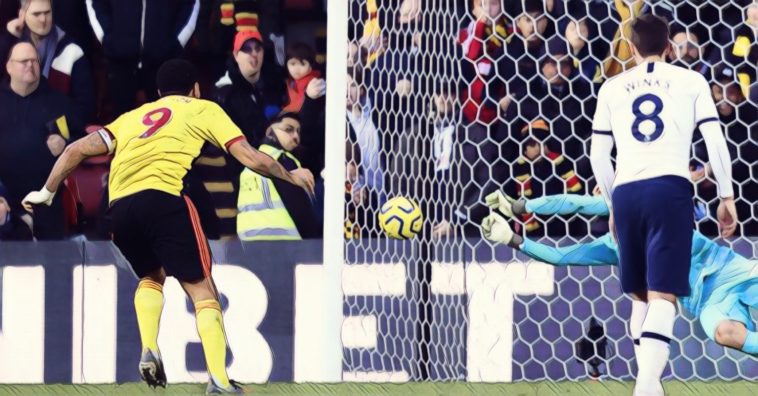 Jose Mourinho insists Tottenham deserved all three points after seeing his side held to a goalless draw by Watford at Vicarage Road.

Spurs would dominate the opening exchanges but failed to make a breakthrough in the absence of the injured Harry Kane, the north London side lacking a focal point in attack and had goalkeeper Paulo Gazzaniga to thank after the Argentine saved a second-half penalty from Troy Deeney to preserve a point.

Despite that fortunate escape, Mourinho insists he was pleased with his side’s display as they kept their first clean sheet away from home in more than a year, and believes Spurs deserved more from a positive showing against Nigel Pearson’s revitalised side.

“We played very well. We started the game without a striker but with lots of offensive players,” Mourinho told BBC’s MOTD.

”We had the control of the game, especially in the first half, We arrived in dangerous positions, we created chances but we did not manage to score. I am happy with how we played, our commitment.

”I think the result is unfair, I think it would have been more unfair if we lost. We are not good at adapting to this style of football. We were quite difficult to play.”

Spurs would have the best of the chances with Dele Alli heading over when well positioned, whilst Erik Lamela thought he had won the contest in stoppage-time only to see substitute Ignacio Pussetto clear his effort off the goal-line in dramatic fashion.

Spurs were *that* close to finding a winner 🤯 pic.twitter.com/N1Xcb2OSrp

VAR was once again the cause of controversy after Spurs saw an early penalty appeal waved away by referee Michael Oliver, whilst Mourinho also believes there should have been a red card – Jan Vertonghen clutching his face after appearing to be shoved over – following a brief melee that saw both Abdoulaye Doucoure and Harry Winks cautioned.

“They did not discuss that one that should have been a penalty and then they looked at one that was clearly not,” Mourinho said.

”That’s also alongside the red cards that should have been. Very bad decisions. I love goal-line technology, I respect that.”