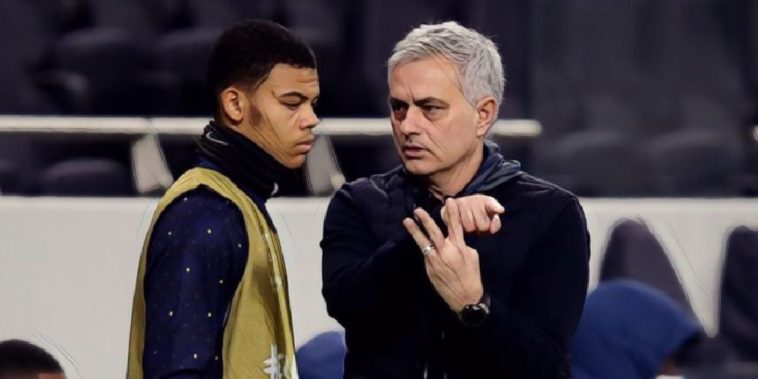 Jose Mourinho has praised Tottenham teenager Dane Scarlett and insisted that the striker will be more heavily involved with the first team next season.

With Spurs having been competing in the Europa League this season, it has provided Mourinho with the chance to hand minutes to the club’s up and coming stars, Scarlett one of a handful of teenagers who’ve featured under the Portuguese so far this term.

The 16-year-old made his debut for the club back in November against Ludogorets and has since gone on to feature twice more in the competition, while he also made a stoppage time substitute appearance in the win over West Brom in the Premier League at the start of February.

His latest appearance saw him come off the bench during Spurs’ last-32, second-leg tie against Wolfsberger, the forward making an almost immediate impact, winning the ball back before teeing up Carlos Vinicius to round off an excellent 4-0 victory for Mourinho’s men.

Although the young Englishman has only made a handful of late cameo appearances this term, Mourinho has revealed that he wants the player to be a more permanent fixture of the first team next season, as he is a ‘fantastic talent’.

“Dane has incredible talent. I don’t want to speak too much because tomorrow I arrive in the building and the kid’s boss is going to kill me,” Mourinho told his post-match press conference.

“I just want to say that he will be 17 next month and I want him to be part of the first team squad next season.

“So this season he is there and here, goes to training sessions with us and matches with the kids of his age and trains there.

“Next season he has to be a first team player. Immense talent. Very good physical development.

“He’s very good, he’s going to be very good. I hope that nothing is going to destroy that potential. He must have feet on the ground and head on his shoulders because he has a fantastic talent.”