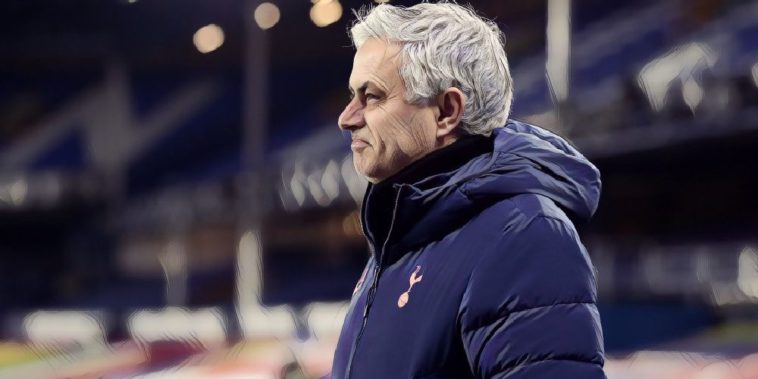 Jose Mourinho has said he is ‘more motivated than ever’ and is determined to be remembered for ‘good reasons’ as the Spurs boss comes under increasing pressure.

Tottenham started the season in superb form and racked up 24 points from their opening 11 games to spark talk of a potential title challenge. Since then though, the club’s fortunes have taken a rapid nosedive, picking up just 12 points from their last 13 outings – losing five of their last six Premier League fixtures.

Such form – and the performances in those games – has ramped up pressure on Jose Mourinho, with The Athletic reporting today that the Spurs squad are becoming ‘increasingly unhappy’ with the Portuguese’s methods.

Speaking ahead of the clubs Europa League last-32 second leg against Austrian side Wolfsberger, however, the 58-year-old insists he is ‘more motivated than ever’ as he looks to turn around the club’s poor form.

“I want to know which coach has always had blue sky and never cloudy or a bit dark,” Mourinho said at his pre-match press conference.

“Perhaps only a coach who is always at a dominant club in a league. It shows how beautiful my career has been. Does it make me depressed? No. It’s a challenge.

“I work for the club, the players and the supporters. I always feel I have to give them so much. It hurts me and it’s a great challenge for me and I believe I can give it. I give it everywhere I’ve been and I’m more motivated than ever.”

Mourinho’s time at the Tottenham Hotspur stadium has statistically been the worst start of any of his managerial stints, picking up just 81 points after his first 50 games in charge, compared to 95 points in the first 50 games at Manchester United and well over 100 in each of his spells at Chelsea.

Various reports in recent days have suggested that Spurs chairman Daniel Levy is already lining up replacements for the under-pressure manager, with Brendan Rogers and Julian Nagelsmann said to be on the club’s radar.

81 – José Mourinho has earned 81 points after 50 league matches in charge of Spurs, his lowest total at this stage in any managerial stint:

Mourinho, however, says he maintains a good relationship with Levy, before saying he is determined to be remembered for ‘good reasons’ once his time at the club finally draws to an end, whenever that may be.

“My relationship is the same since day one which is one of respect and open communication,” he said.

“We respect each other. I believe we all feel the same feelings. Nobody is happy, nobody is depressed and everybody feels we are going to do better.

“I believe that we will win through and that I will be in Tottenham’s history for the good reasons and not for the bad reasons.”

Spurs are currently ninth in the Premier League, though have progressed to the Carabao Cup final in April while they have one foot in the Europa League last 16, holding a 4-1 advantage over Wolfsberger ahead of Wednesday’s second leg.