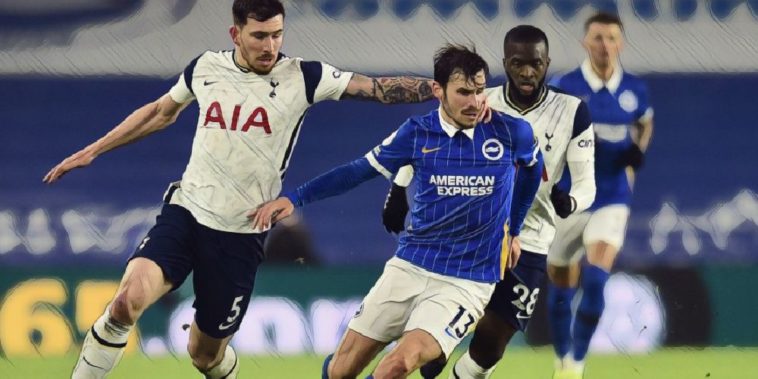 Jose Mourinho has said that Tottenham’s were playing with a degree of ‘sadness’, as Spurs slipped to back-to-back Premier League defeats with a 1-0 loss to Brighton.

After their midweek loss at the hands of Liverpool, Mourinho’s side would have been hoping for a much-improved performance at the Amex, although they went into the match without star man Harry Kane due to injury.

The hosts made a strong start to the game and were duly rewarded after just 17 minutes, with Belgian international Leandro Trossard slotting home following good work from Pascal Gros inside the penalty area.  Graham Potter’s men will have been frustrated going in at half-time at just 1-0 after a dominant first-half showing, while Spurs rarely threatened as the absence of Kane began to show.

Mourinho acted swiftly by bringing on Carlos Vinicius at half-time in place of defender Davinson Sanchez, yet the attacking change did little to liven up their limp display, with Gareth Bale putting in another underwhelming showing before he was substituted on the 60-minute mark.

The Seagulls continued to look threatening on the counter though they were unable to extend their lead, while they were left to thank ‘keeper Robert Sanchez for keeping them ahead, the Spaniard producing an excellent save from a curling Vinicius effort.

In truth that was one of few attempts on goal for Spurs, while Potter’s men were denied a deserved second after Toby Alderweireld’s superb block from a close-range Aaron Connolly effort late on, yet the home side hung on to claim a huge three points in their survival bid.

That result leaves Spurs six points behind Liverpool in fourth, albeit with a game in hand, while they are also now 11 points behind leaders City, despite having been firmly in the title race not too long ago.

While Mourinho was vague regarding what went wrong for his side, he did claim that his side were playing with a certain degree of ‘sadness’ having gone a goal behind, and said his team ‘tried hard’ to turn the game around despite the absence of the influential Harry Kane.

“We didn’t start well. They could have scored immediately when they hit the post,” Mourinho told Sky Sports.

“In the first half, I felt the team was probably too sad with the goal conceded and the situation. There was a lack of energy. In the last 25, 30 minutes they gave everything but of course with some limitations. We couldn’t score but at the same time, we gave them the chance to counter-attack.

“The boys showed great spirit in the second half and the boys showed they are suffering and they tried to fight against that sadness.

“They tried, so I have nothing negative to say about them. I leave the game with a good feeling about my boys because they tried hard in the second half.

“We tried everything but they defended everything, brought on another centre-back, and it was not possible for us to score.”

It doesn’t get much easier for Spurs as they face Chelsea in their next game on Thursday, before a clash with relegation-threatened West Bromwich Albion on Sunday.