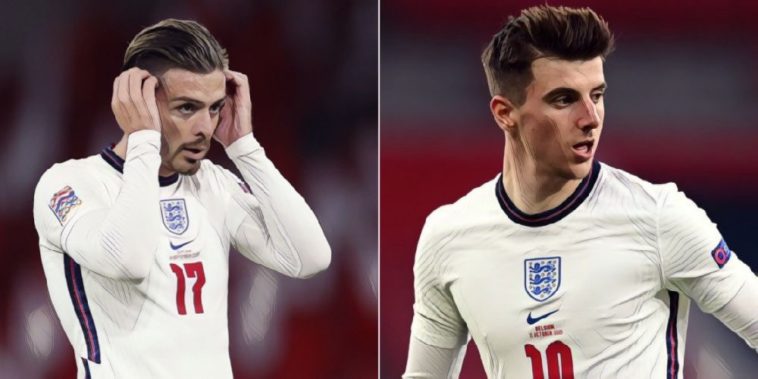 Mason Mount has opened up on his blossoming ‘connection’ with the ‘brilliant’ Jack Grealish and is confident the duo can thrive together in the England midfield.

Grealish made his first start for England during the 3-0 friendly victory over Wales last week and starred for Gareth Southgate’s side at Wembley, providing an assist for debutant Dominic Calvert-Lewin and providing a creative threat throughout.

The Aston Villa captain was surprisingly omitted from the side for the victory over Belgium despite his stand-out display just days earlier, with Chelsea midfielder Mount preferred in attacking midfield role for the Nations League clash.

Mount scored the winning goal as England secured a 2-1 victory over the world’s number one ranked nation, but despite appearing to be in competition with Grealish for a starting spot, believes the two can play together as they continue to learn each other’s game at international level.

“I love watching him [Grealish] play as well. He’s brilliant to be around. Obviously, we all know what he can do, what a brilliant player he is,” Mount told Sky Sports. “I get on very well with Jack. He’s a brilliant player and, yes, we always want to play together.

“We have such a strong group with loads of top, top players. You always want to play with the best and when you come away with England you’re doing that.

“It means so much to come away and play with the likes of Jack and the top, top players in the group.

“You’re learning all the time. Sometimes when you come away you don’t really know what kind of moves they make on the ball.

“You have to kind of learn about the players while you’re away training. You don’t get much time, but when you’re playing the games you kind of have that connection and I think me and Jack do definitely have that. You always want to play with the best players, win a lot of games as a group.

“We want to win things, we’re definitely on that path to keep working hard and to get better and better.”