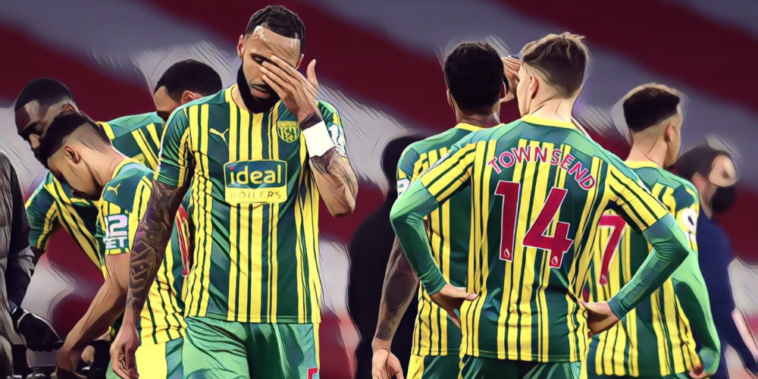 West Brom’s relegation to the Premier League was confirmed on Sunday following the club’s defeat to Arsenal at the Emirates, the Baggies suffering an instant return to the Championship following promotion last season.

It continues to be a yo-yo existence for the club between England’s top tiers, having been regular promotion and relegation contenders dependent on which division they have found themselves in.

Following West Brom’s latest relegation back to the second tier, we’ve looked at the clubs to have suffered the dreaded drop from the top flight on the most occasions.

Here are the five clubs with the most relegations from the English top flight:

Bolton have been relegated from the top division of English football on 10 occasions throughout their history, including on three occasions during the Premier League era.

Bolton bounced between the top two divisions for much of their early history, though after promotion during the 1934/35 campaign enjoyed an uninterrupted sequence of top-flight action that lasted 24 seasons.

After spending the majority of the next three decades in the lower leagues, Bolton enjoyed three promotions and two relegations in just nine seasons during the Premier League era, before a spell of consolidation at the highest level that started under Sam Allardyce and lasted 11 years.

Bolton’s most recent top-flight relegation came during the 2011/12 season and the club are yet to return to the top tier, dropping down the divisions amid financial turmoil. Ian Evatt’s side will play in League One next season however, after earning promotion from the fourth tier this season as they hope to make another climb up the footballing ladder.

Manchester City’s huge success over the past decade makes the threat of relegation seem a distant memory, the club having won four top-flight league titles since 2012 with a fifth set to follow this season.

Only three clubs have ever been relegated from the top tier on more occasions than Manchester City however, who have dropped into the second division 10 times throughout their history.

Three of those relegations came during an up-and-down period in the late nineties and early 2000s, though since winning promotion under Kevin Keegan in 2001/02, the Manchester side have remained a top-flight outfit, a status which looks set to continue for some time with City now England’s dominant force.

Leicester rank joint-second for top-flight relegations having suffered the drop 11 times, three of which have come since the inception of the Premier League.

The Foxes’ first relegation came in their very first season at the highest level of English football, suffering an instant return to Division 2 after their maiden top-flight campaign in 1908/09.

Twice relegated in the 1930s, Leicester have spent almost their entire history in the top two divisions, though dropped down into the third tier as recently as 2008/09 – their most recent Premier League relegation coming five seasons earlier.

Since winning promotion back into the Premier League in 2013/14 the club have gone from strength to strength, improbably winning a first ever top-flight title in 2016 and becoming regular contenders for European qualification.

West Brom’s relegation this season was their 11th from the top division in their history, ranking the Baggies joint second alongside Midlands rivals Leicester.

The club’s relegation from the top-flight this season was the first-ever by a side managed by Sam Allardyce, the Premier League’s most notorious firefighter finally failing to keep his team in the division.

West Brom were promoted to the Premier League three times during the noughties, though each time found themselves back in the second tier within two seasons.

🗣 "We've given it our best shot, but that hasn't been good enough."

This season’s instant return to the Championship is the fifth time the club have suffered the drop during the Premier League era, with no side having ever managed more (Norwich also have five).

It is, however, Birmingham City who hold the unwanted record for most top tier relegations in English football history, dropping out of the top flight on 12 occasions throughout their history.

The first of those came after a four season spell in the top division, before swapping divisions four times in four seasons after following two relegations with instant returns to the Premier League.

Birmingham’s most recent relegation came in 2010/11 and saw the club become the first team in Premier League history to win a major trophy and be relegated in the same season, Alex McLeish’s side lifting the League Cup with a memorable victory over Arsenal before suffering a much more forgettable drop into the Championship.