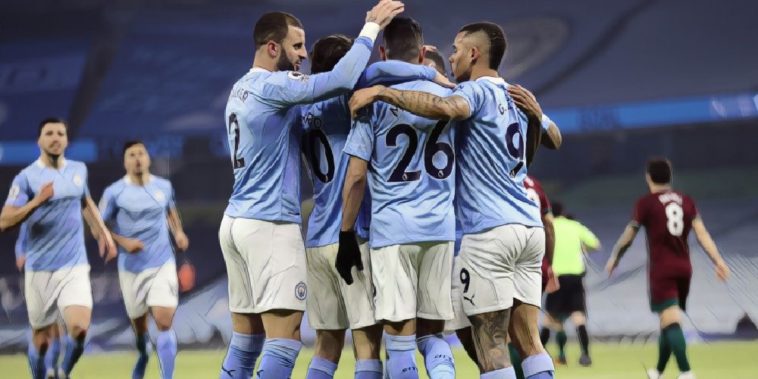 Manchester City continue to go from strength to strength under Pep Guardiola this season, the Premier League leaders taking a huge step reclaiming the title in recent weeks.

Guardiola’s side have opened up a 15 point lead at the top of the Premier League following their 4-1 win over Wolves on Tuesday evening, the Spanish coach having overseen a glittering period of success at the Etihad.

City have played some incredible football under the Catalan’s management and we’ve decided to look back at some of the names to have starred, here are the five leading scorers from Guardiola’s reign at Manchester City so far:

Leroy Sane ranks fifth amongst Manchester City‘s leading scorers of the Guardiola era, the winger having made quite a mark after signing from Schalke in a £37m deal as one of the Spaniard’s first signings.

Guardiola had seen the youngster’s talent up close during his spell in the Bundesliga at Bayern, and the signing proved an inspired one as Sane developed into one of the Premier League’s finest wingers.

Sane spent four seasons with the club and scored 39 goals in 135 appearances across all competitions, winning back-to-back league titles and being named as the PFA Young Player of the Year during the club’s record-breaking 2017/18 season.

Sane’s speed and skill mesmerised during a memorable spell that also included two League Cup triumphs and an FA Cup winners’ medal before returning to Germany to sign for Bayern Munich in a £55m deal last summer.

Kevin De Bruyne is widely regarded as the Premier League’s best creator, but the midfielder has chipped in with more than his fair share of goals in recent seasons, scoring 44 times in all competitions since Guardiola’s appointment.

De Bruyne has developed into arguably the most complete midfielder in world football and enjoyed the best goalscoring season of his career last term, netting 13 league goals and providing a record-equalling 20 assists to win the PFA Player of the Year award.

The Belgium international remains one of the most influential footballers in the Premier League and the heartbeat of the current City side, the 29-year-old starring once more as he looks to add to the seven major honours he has lifted since signing from Wolfsburg in 2015.

Gabriel Jesus netted twice in the over Wolves to score his 78th and 79th goal for Manchester City across all competitions, an impressive figure give his battle to secure a starting spot much for of his time at the Etihad.

Jesus has often been accused of lacking a clinical touch around the penalty area but his 79 goals have come from just 112 starting appearances, a stunning return for a player who remains just 23-years-old.

Jesus also boasts a record of 18 goals in 41 appearances for Brazil and will hope to convince Guardiola he can be the player to lead the City attack in the coming seasons, with all-time record scorer Sergio Aguero having entered the final months of his contract with the club.

Sterling has been transformed from a frustrating figure into a reliable source of end product, scoring more than a century of goals for Manchester City since Guardiola’s arrival at the Etihad in 2016.

During that time the England international has won the FWA Footballer of the Year and PFA Player of the Year accolades, whilst he starred as City won back-to-back league titles in 2018 and 2019.

The latter of those triumphs saw Sterling score 25 goals in all competitions as City won the first domestic treble in English football history, before a career-best campaign delivered 31 goals in 2019/20.

Even given his injury problems there was only ever going to be one man at the top of this list, Sergio Aguero having been one of the Premier League’s greatest ever imports over the past decade.

The Argentina international has scored a staggering 256 goals in all competitions for City with 120 of those coming since Guardiola’s appointment as manager, netting 30+ goals in each of the Spaniard’s first three full seasons in charge.

There are few players to have graced the Premier League as deadly when handed a shooting opportunity, that familiar sight of Aguero lashing home a ferocious strike with minimal back-lift having been all too rare following an injury-hit 2020/21.

Guardiola will hope the talismanic star can get back to full fitness quickly after making his latest return as a substitute against Monchengladbach last week before starting in the win weekend win over West Ham, with hopes high Aguero can fire City to Premier League and Champions League success in what may prove the final season of his record-breaking Etihad career.