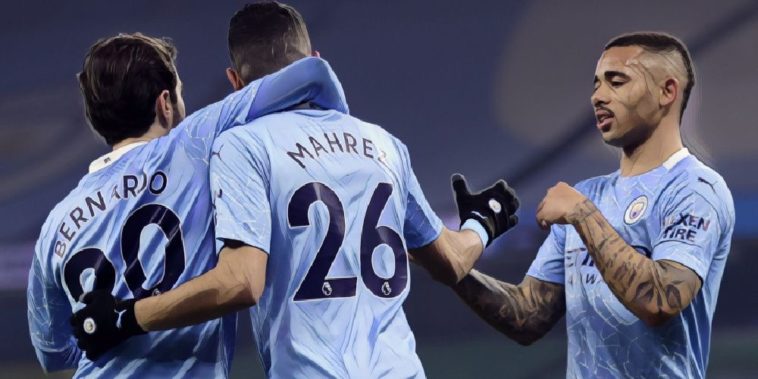 Manchester City continued their relentless march towards a third league title in four years with a dominant 4-1 win over Wolverhampton Wanderers at the Etihad.

The Premier League leaders quickly got down business and immediately set about producing a performance of total domination, completing almost four times as many passes as the visitors in the first half alone.

The hosts took the lead in the 15th minute, centre midfielder Rodri finding Riyad Mahrez in his trademark right-wing position. The Algerian put a dangerous cross across the box towards Raheem Sterling at the back post, and while Leander Dendoncker got to the ball first, he was unable to prevent it from ending up in the back of the net.

Man City would have one disallowed for the most marginal of offsides, Mahrez once again crossing the ball from the right with Aymeric Laporte poking home at the back post, though the defender was deemed to be offside.

Rui Patricio made a number of fine saves throughout the game, keeping out a Bernardo Silva header before the break, while he stopped a low Kevin de Bruyne effort within five minutes of the restart.

The visitors had offered very little in an attacking sense, but in the 61st minute, they threatened to spring a surprise result as they hauled themselves level from a Joao Moutinho free-kick. Ruben Dias made his move fractionally too early to play everyone onside, with Wolves skipper Connor Coady getting in front of the Portuguese defender to send his header past Ederson into the bottom corner.

City would, however, regain the lead with just 10 minutes to play, the ball being slipped down the right into Kyle Walker who fizzed a low ball across the Wolves box. The cross evaded everyone but would clip the heel of goalscorer Coady, falling conveniently into the path of Gabriel Jesus who smashed home.

Up next the Manchester derby. pic.twitter.com/oPj48Efzzq

Pep Guardiola’s side made sure of the points as the game ticked into added time, substitute Owen Otasowie cheaply losing possession in a dangerous area just outside the box under pressure from Rodri, City quickly moving the ball before Riyad Mahrez opened up his body on the edge of the area to fire past Patricio.

City would then extend their lead and secure all three points with the last kick of the game, Gabriel Jesus slamming home from close range after Patricio had parried Ilkay Gundogan’s effort, and speaking afterwards Pep Guardiola discussed his side’s reaction to being pegged back.

“We were little bit anxious after 1-1 but we reacted really well after we scored the goals,” he told Match of the Day.

“It was well deserved – we played really good. The games are tight and in the last minutes we win the game comfortably.

“After 1-1, they were dangerous but we continued to take the ball and we didn’t give up and that’s a good lesson for us the little details.

“When you see the performance we were really good. I felt this morning that we were together and we were ready to try again.

19 – Man City haven’t trailed for a single minute in any of their last 19 Premier League games – equalling Arsenal’s competition record of 19 consecutive games without falling behind, set between December 1998-May 1999. Relentless. pic.twitter.com/qg4EvDyVC9

“It’s a short calendar this season. We didn’t have one long week – there are so many games and playing Wolves with their physicality and mentality; I’m more than pleased with what we’ve done so far and we can enjoy tonight, rest and prepare for the next one.

The win extends Manchester City’s record-breaking winning run to 21 games, a record which Guardiola considers ‘remarkable’ given the ‘hell’ of the English fixture list over the winter months, but insisted his side need to carry on if they are to claim the title.

“The record we will talk about in the future. In Winter time – November, December, January in England, it is hell! It’s more than remarkable.

“I’m more than proud but at the same time, Liverpool are the champions. To win the Premier League we need those points.”

Next up for City is a Manchester derby against second-placed United at the weekend, the two side’s having played out a dull 0-0 draw earlier in the season.