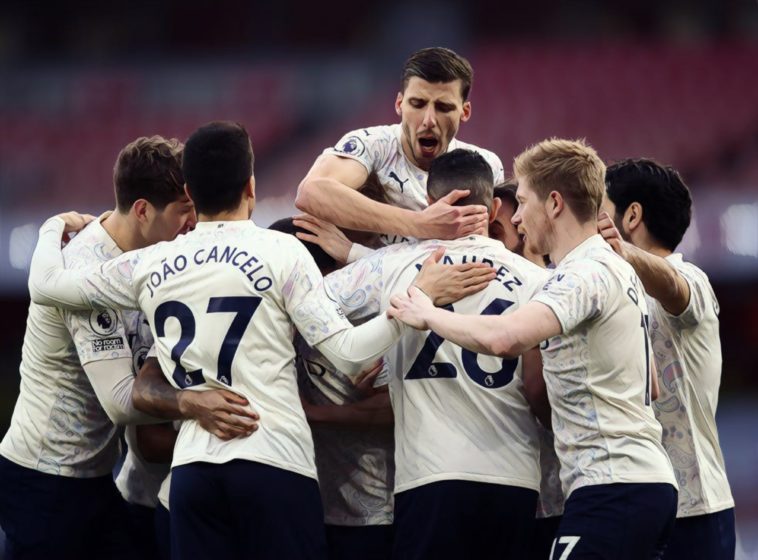 Manchester City’s juggernaut has shown few signs of slowing down with the league leaders securing a 1-0 win at Arsenal this weekend, incredibly the club’s 18th consecutive victory in all competitions.

The success of Pep Guardiola’s side has been built on a formidable defensive record with City having kept 13 clean sheets in their past 17 league fixtures, whilst the club have not fallen behind in a Premier League contest since losing at Tottenham in November.

It’s an extraordinary run of form and following their latest win at the Emirates we’ve looked at the longest run a team has gone without going behind in Premier League history:

Arsene Wenger’s arrival as Arsenal manager transformed the north London side into one of the Premier League’s best sides, with the Gunners compiling a 15-game run without trailing during their 2001/02 double-winning season.

Wenger’s side were as low as fourth in mid-January in a fascinating four-way battle to be crowned champions, before embarking on a second half of the season surge to win a second Premier League crown in five seasons.

Robbie Fowler’s opener for Leeds in a 1-1 draw on January 20 started a run of 15 games without falling behind, including a run of 12 consecutive victories with Sylvain Wiltord’s goal at title rivals Manchester United clinching the championship.

Arsenal fell behind for the first time since the draw with Leeds on the final day of the season against Everton, only to come from behind and secure a 4-3 victory at Highbury.

The start and end of the 2000s belonged to Manchester United with the Premier League’s dominant force twice winning three league titles in succession, the latter of those three-peats coming during the 2008/09 season.

Sir Alex Ferguson’s side faced strong competition from Liverpool before finishing four points clear of their fierce rivals, their success built on a record-breaking defence that set an incredible landmark.

After losing at Arsenal in November the Red Devils began a record run of defensive solidity, going 15 games without falling behind until a Peter Lovenkrands opener for Newcastle in early March.

The reigning Premier League champions have faltered this season with their current plight a far cry from an almost flawless 2019/20 season, with Liverpool securing a first league title in 30 years with a record seven games to spare.

Liverpool’s success was built on a near-perfect start to the campaign after winning 26 of their opening 27 league fixtures of the season, including winning a joint-record 18 in succession.

That run of wins included 15 without falling behind between November and February, starting with a crucial 3-1 win over defending champions Manchester City and ending following a shock first defeat of the season at Watford.

Manchester City’s current run is the second-longest sequence without falling behind in Premier League history and the league leaders are closing in quickly on setting a new landmark.

Pep Guardiola’s side were in the bottom half of the division following a 2-0 defeat at Tottenham in November, before putting together a 17-game unbeaten run and opening up a 10-point lead at the top of the division.

The club’s imperious form has included 14 consecutive victories in the league and 18 in all competitions, with few signs that any side will be able to stop the Etihad outfit from claiming a third Premier League crown in four seasons.

City need to complete three more games without trailing to set a new record and each of their next three come on home soil, facing West Ham and Wolves before a huge Manchester derby clash with second-placed Manchester United on March 7.

Arsenal hold the current record for most games without falling behind and, somewhat incredibly, are the only side on this feature not to win the Premier League title.

The north London side went a huge 19 games without trailing during the 1998/99 season, their run beginning following a 3-2 loss at Aston Villa and ending following a 1-0 defeat at Leeds that saw Jimmy Floyd Hasselbaink score a decisive late goal.

That defeat at Elland Road proved costly as the Gunners finished just a single point behind Manchester United, who would go on to claim a historic Premier League, FA Cup and Champions League treble.

The longest winning runs in English domestic football, from the 19th century to the present day