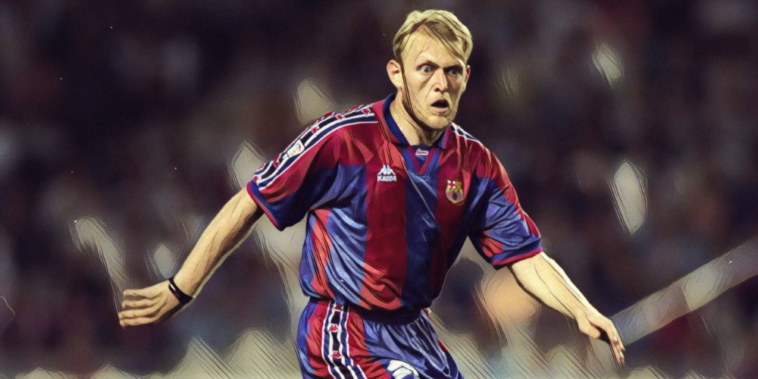 Representing Real Madrid or Barcelona often represents the pinnacle for professional footballers, Spanish football’s superpowers possessing a grandeur and allure the envy of the global game.

Those who adorn the colours of the duo are required to be amongst the very best in the game, so to have turned out on both sides of the El Clasico divide, it’s fair to say Robert Prosinecki possessed huge talent.

Prosinecki was part of Croatia’s fabled generation of talent, featuring in the side that finished third during the 1998 World Cup in France, scoring two goals as the Croats reached the latter stages before defeat to France.

Prosinecki was a fine footballer, but his career has since come to be defined by a series of anecdotes of a talent who failed to reach the heights once expected.

Born in West Germany, he moved to what is now Croatia a decade later as his Yugoslavian parents returned to their place of birth.

Signed to the footballing talent factory that is Dinamo Zagreb, he emerged through the ranks under the guidance of Miroslav Blažević – a coach that would leave an indelible impression on his career.

After scoring on his debut Prosinecki made just one further appearance for Dinamo, with discussions over a new contract ending in dispute between club, player and coach and the talented youngster departed to sign for Red Star Belgrade.

Prosinecki’s demands for a professional contract had irked Blažević, who released the midfielder from his youth deal in a statement of who was in charge.

It was a decision the club would come to regret.

Red Star provided Prosinecki with the platform to fulfil his talents, with the youngster shooting to prominence after winning the Golden Ball award as the tournament’s best player whilst representing Yugoslavia at the 1987 World Youth Championships.

Starring alongside an exciting midfield contingent at club level, Red Star were crowned champions that season in what proved the start of a meteoric rise for the side.

Robert Prosinecki. King of the drag back. Some player! pic.twitter.com/RloBn5cy7E

Further league titles followed in 1990 and 1991, the second coming alongside the greatest triumph in Red Star’s history as Marseille were defeated in the European Cup final.

Vladimir Jugović, Prosinečki and Dejan Savićević formed a midfield trio that has become criminally underrated amongst the European archives, with Prosinecki scoring 18 goals in all competitions as the technician with flowing blond hair became Eastern Europe’s most exciting talent.

To the surprise of none, interest from the west of the continent arrived and Real Madrid secured the signing of the gifted midfielder, sealing the signing of a 22-year-old who finished 1991 fifth in the Ballon d’Or voting.

The dream move soon turned into an injury-ravaged nightmare however, as Prosinecki’s body failed him during a debut season in which he made just five appearances across all competitions.

As Barcelona dominated the landscape in Spain, the footballer Real had hoped could loosen the Catalan’s grip on the title was restricted to a watching brief.

The following two seasons saw Prosinecki feature more prominently, but he failed to deliver on the hysteria that had greeted his arrival in the Spanish capital with his performances modest at best.

His fortunes reached a nadir as the Real hierarchy criticised his signing and he was loaned to Real Oviedo in a bid to find the consistency – both in form and fitness – that had deserted him at the Bernabeu.

The move proved a positive one as Prosinecki linked up with former Madrid manager Radomir Antić, restoring his reputation including a starring performance as Oviedo beat his parent club 3-2.

Hopes of a return to Real failed to materialise however, with the midfielder instead completing a controversial move to arch-rivals Barcelona as Johan Cruyff sought to coax the best from a maverick who had lost his mojo.

Injuries again decimated his chance to shine at Spain’s superpowers, spending less than two seasons with Barcelona before moving on to a short spell at Sevilla, later bouncing round a succession of clubs as his once limitless potential remained unrealised.

He made a return to Dinamo in 1997, where his performances ensured he formed part of the Croatia side that travelled to France for the ’98 World Cup in France, having won admires for their debut major tournament performance as an independent nation at the European Championship two seasons earlier.

Thriving in a talented side alongside the likes of Davor Suker and Zvonimir Boban, Croatia breezed through the group stage with Prosinecki finding the net with a wonderful feint and curling effort in their opening win against Jamaica.

On this day in 1998, Robert Prosinečki scored this vs Jamaica. pic.twitter.com/EXnUTjB6j2

Having scored for Yugoslavia at the 1990 World Cup, he became the first – and remains the only – player to have scored World Cup finals goals for two different nations.

Romania were beaten in the last 16, before a 3-0 thrashing of Germany in the quarter-finals proved an emphatic statement of Croatia’s intentions.

Their run was ended by France following a thrilling semi-final, before sealing third-place with a win over the Netherlands in the third/fourth play-off with goals from Prosinecki and Suker downing the Oranje.

Hopes that Prosinecki’s fine performances at the World Cup could reignite his club career proved short-lived, as he remained in Croatia and Belgium before becoming a shock signing for Portsmouth.

Once hailed as the future of European football, the veteran now found himself under the Fratton Park lights in England’s second tier, his arrival hailed as ‘gift to Pompey fans’ by chairman Milan Mandaric.

He spent just one season on the South Coast, but it was enough to cement his place in Fratton Folklore with the maverick’s magic still evident despite his ageing legs.

“He was ancient when he came to play for us, but he was still brilliant,” former teammate Gary O’Neil told talkSPORT.

“When he came to the club I thought: ‘He’s rubbish! He can’t run, how’s he going to play for us?’ But he’d get the ball and you were just like: ‘Oh my God, this guy is a genius!’

“You couldn’t get the ball off him, he’d do step overs that would fool an entire team.

“He literally couldn’t run, it was like playing football with your Dad!

“But he was an unbelievable player. He trained at a tempo he wanted to train at, he’d just play in the number ten and I would do all his running, but he was breath-taking. The stuff he did was incredible.”

Amongst the highlights of the midfielder’s single-season spell with Harry Redknapp’s side was a thrilling home draw with Barnsley, in which he scored a sensational hat-trick as the two teams shared eight goals at 4-4.

Peter Crouch remembers vividly the impact of the wondrous Prosinecki, a chain-smoking whiskey-drinking wonder who lit up games in the colours of Portsmouth.

“Robert fitted the word ‘maverick’ perfectly and the only time he wasn’t smoking a Marlboro Red was when he was on the pitch.

“We would barely see him at training during the week but, my God, when he played for Portsmouth he was unbelievable.

“He had this trick where he would shape to shoot, feint and then roll his foot over the ball to leave the defender absolutely bamboozled.

“You knew it was coming, you could see a mile off what he was going to do, but it was just impossible to stop.

“He must have been some sight in his pomp, when he played for Red Star Belgrade and Real Madrid. He was a one-man band for Portsmouth, a joy to behold.”

The gulf in class between Prosinecki and both his teammates and opponents was clear to see, even if his career had fallen since the dizzying heights of European Cup success with Red Star.

His single-season saw him remembered as one of Portsmouth’s all-time greats, a footballer who the club’s fans could barely believe was waltzing around defenders in their colours.

He earned a recall to the Croatia side for the 2002 World Cup in what represented one last chance at success internationally, before his career faded across the following two seasons.

Prosinecki never quite became the footballer he once promised to be, but he was one who could make things happen whilst retaining the appearance of man at comfort in slippers and pipe – just the way you imagine he would have liked it.