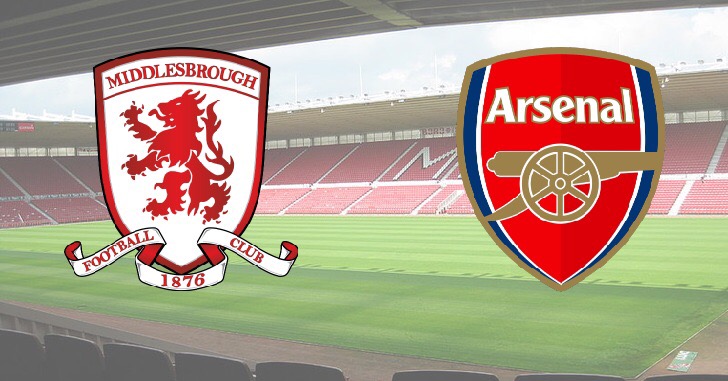 In a game of vital importance to both sides, Monday’s clash at The Riverside Stadium will see two teams desperate for a win. Failure to win for either would seriously dent their chances of achieving their respective targets.

After the disappointment of the 0-0 draw at home to Burnley last week, a wasted opportunity to close the gap on those above them, Monday’s game is one that Middlesbrough simply have to win. A tall order given they’re playing against one of the league’s big hitters, yet Arsenal are hardly in sterling form either.

With another big crowd expected at The Riverside, a place where attendances have been one of the few plusses this season, Middlesbrough will be looking to their Twelfth Man to spur them on to a much needed victory.

With games fast running out, a win here would be a real shot in the arm. To stand any chance of that, Boro will have to keep out an Arsenal team with high ambitions of their own. Should they concede first, you fear for the league’s lowest scorers.

A game both teams must win

For Arsenal, the ongoing saga surrounding Arsene Wenger’s future intensified to new levels after the calamitous defeat against Crystal Palace. A damaging result that left some Gunners fans labelling the players as “cowards”.

With morale at an all-time low and some of the limpest performances in Wenger’s 20 years, things seemingly can’t get much worse for Arsenal.

Sitting uncomfortably in 7th, nine points off the pre-requisite top 4 spots, Arsenal are in real danger of missing out on Champions League qualification for the first time under the Frenchman.

A return to winning ways at The Riverside is a must should they want to keep the top 4 target alive. Failure to do so will leave them with a mountain too high to climb.

Without an away win since January, they will be keen to end that run and banish the painful memories of that 3-0 capitulation at Selhurst Park. A loss would represent their worst away run since 1984, the last time they lost 5 on the bounce on the road. They’ll need their key men, the likes of Alexis Sanchez and Mesut Ozil, to be on form and firing to avoid another reverse.

I think by now, unless you’ve been living under a rock for the past few months, you’ll know that Middlesbrough haven’t been in the greatest form. That’s putting it kindly – in short they’ve been on a terrible run. Without a win since December 17th, against fellow strugglers Swansea, Boro have rarely looked like adding to the 4 they have this season.

The return fixture at the Liberty Stadium earlier this month was the start of what was dubbed by many as the ‘week of destiny’. In truth, come the end of that week they now look destined for the drop. A disappointing return of just two points simply not enough to raise hopes of survival. The week was bookended by two 0-0 draws starting with that Swansea game and finishing with Burnley at home.

A freak result sandwiched in between at Hull City’s KCOM Stadium saw Boro concede 4 in a game for the first time this season. Whilst managing to score twice, a rarity in itself, the 4-2 loss against a relegation rival was a real body blow.

For Arsenal it’s only two wins in their last six, but perhaps more damaging is the 3 heavy defeats, conceding three in each one. There’s no denying Arsenal’s embarrassing 10-2 aggregate exit in the Champions League against Bayern Munich has done nothing for confidence, but the uncertainty around Arsene Wenger’s future isn’t helping either. The calls for ‘Wenger out’ intensified after the defeat at Crystal Palace in midweek, the latest in a series of abject performances.

Away from home they can’t buy a win, losing at both West Brom and Liverpool 3-1, in fact The Gunners’ last win on the road came in the 4-0 demolition of Swansea back in January.

They seem fragile at the back, shipping 11 goals in their last 6. During that period they’ve only managed 7 at the other end, stats not in keeping with a team who have eyes on Champions League qualification. They simply cannot afford another defeat on Monday. Nine points off the top 4, though they do have some games in hand on some of the teams around them, means that maximum returns are needed now more than ever.

Rather cruelly Calum Chambers (foot) has returned to full fitness raring to go, however the terms of his loan from Monday’s opponents mean he’ll be ineligible. Gaston Ramirez (ankle) should also make a return to the squad.

As you’d expect, Boro are rank outsiders for the win, the price of 19/4 telling you all need to know there. Arsenal are currently 4/7 to end their terrible away form with a victory, with a stalemate coming in at 16/5.

My tip would be an Arsenal win with both teams to score, priced at 21/10.

Middlesbrough simply have to go for it and could trouble what has been a far from solid Gunners backline. Yet as recent evidence proves, an attack-minded Boro leave gaps, and that spells danger with Sanchez and co around.