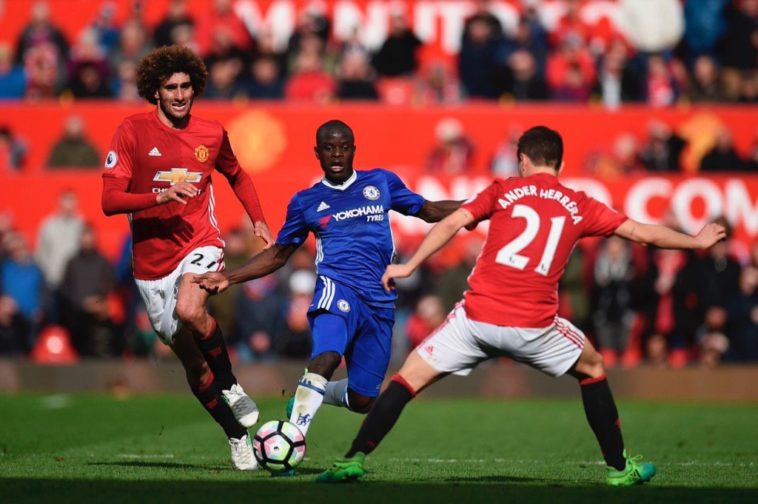 Surprises were abundant at Old Trafford today as Manchester United exacted their revenge on Chelsea by to the tune of a 2-0 win on Sunday.

There were many twists and turns before the game even started. Thibaut Courtois was fit to play going into the pre-match press conference, but injured his ankle. He was rumoured to be filming a promo video for the NBA when he suffered his injury.

Lineups were announced and Asmir Begovic started in goal for the visitors. Marcos Alonso was also named in the starting XI, but was taken out last minute due to an illness. Cesar Azpilicueta moved to Alonso’s spot, and Kurt Zouma filled into the right center-back position.

Manchester United also played an unusual lineup, with manager José Mourinho stating that his players were fatigued and needed rest, namely Zlatan Ibrahimovic. The Swedish striker was on the bench, along with Henrikh Mkhitaryan.

With weird lineups, Ander Herrera stepped up and played an amazing two-way game. He had the task of man-marking Hazard, who could not complete a single take-on against the Red Devils, and was anonymous throughout the match.

The Spanish midfielder played a perfectly weighted pass in the seventh minute to Marcus Rashford who managed to slip behind the Chelsea back line on a counter attack. He outran David Luiz to put a calm finish on the ball past Begovic to make it 1-0.

The goal was not without controversy as Herrera was accused of a handball, but referee Robert Madley did not blow his whistle for a foul.

Herrera added a goal to his tally after a Rashford free kick in the 49th minute when his shot went through a crowd of Chelsea defenders and into the net. It was enough to put the game to bed.

In the second half, Chelsea had more possession of the ball, but were unable to do anything with it, getting zero shots on target for the day and making David De Gea’s day easy and uneventful. United coasted until the end to earn three points as they try to get closer to the coveted Champions League spot in the top four. The Red Devils play against Burnley at Turf Moor on Sunday, April 23.

Chelsea are only four points above Tottenham with six matches remaining in the Premier League season. Spurs don’t look like losing any time soon, so the Blues need to win five of their last six games to clinch the title. They play Southampton next in the Premier League at Stamford Bridge on Tuesday April 25, but they have a date with the Spurs at Wembley for the FA Cup semifinal on Saturday.

Manchester United controlled the match in the first half with over 60% possession. They looked to pick the tempo at which the game was played at, and Chelsea was left reacting on the backs of their feet.

Whenever Chelsea did have the ball, a red shirt or two would quickly pounce to regain possession. Eden Hazard and friends were unable to do anything, and it left them out of position as they reacted to United’s counterattacks like sloths.

This type of pressure led to the two goals that United scored as Herrera and Ashley Young pounced on loose balls from Chelsea mistakes.

When Chelsea were in form, Costa looked like a new person. Gone were the antics that villainized him to opposing defences and referees. Chelsea’s leading scorer looked happy to be playing the game he grew up playing on the streets of Brazil before moving to Spain.

Costa was always criticized of playing dirty, and people seemed to forget about that during Chelsea’s run to the top of the table. Now that he’s in a scoring slump, he seemed to have reverted to his old self. He’s become a yellow card waiting to happen once again.

Costa has plugged the flow of Chelsea’s attacks, and his negative antics are becoming more annoying to all fans, not just Chelsea’s. He’s simply not helping the cause, and Chelsea are running out of time to find a solution.

Manchester United may have figured out the way for other clubs to beat Chelsea. Ander Herrera man-marked the 2014–15 PFA Players’ Player of the Year out of the game. He grabbed an assist on the first goal, and put the final nail in the coffin by scoring in the second half. Herrera was easily the man of the match.