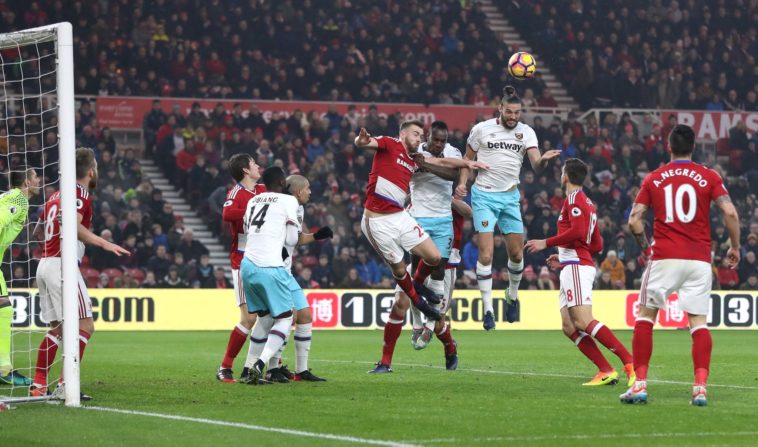 Andy Carroll scored twice for West Ham as the Hammers beat Middlesbrough 3-1 at the Riverside Stadium to move into the top half of the Premier League for the first time since August.

The 6ft 5in striker struck twice in the first half, before making way for substitute Jonathan Calleri, who rounded off a great day for the 2,000 travelling supporters by adding a third goal in the fourth minute of stoppage time.

West Ham have now won their last two league matches, scoring six goals and only conceding one, as they continue to improve and adapt to life without Dimitri Payet.

Thereafter, Middlesbrough dominated long periods of the half without taking full advantage of their possession. Alvaro Negredo and Adama Traore both going close as the hosts looked for an equaliser.

The home side did hit back on 27 minutes with a well-worked move that ended with Christian Stuani tapping in Calum Chambers’ low cross.

Two more low crosses from Traore were slipped across West Ham’s goalmouth but no forwards were able to get a touch.

Just when it looked like it would end all square at half time, Carroll pounced again after Boro’s keeper, Victor Valdes, could only parry away Michail Antonio’s 25 yard effort. The rebound fell to Carroll who slipped the ball into the net to give West Ham the lead at the break.

The second half saw the home side again have the lion’s share of the ball and a number of chances came and went, with Traore yet again proving to be Middlesbrough’s most potent threat.

His speed and trickery were a constant worry and, if rumours are to be believed, he could be on his way to Chelsea very soon.

An attempted clearance by West Ham’s Aaron Cresswell that came back off of the cross bar was probably as close as Middlesbrough came to equalising.

Carroll was substituted on 67 minutes, more a precaution than for any injury. However, before going off he played one more significant part to the game when on 48 minutes he played Lanzini through only for the Argentinian to shoot weakly straight at the ‘keeper.

Late in the game ‘Boro threw on their recent signings Patrick Bamford and Rudy Gestede, but it was the Hammers who scored late on with Calleri scoring to make 3-1 on 94 minutes.

The result means the home side’s winless run in the top flight now stretches to five games and a sizeable section of their support made its feelings known late on.

Middlesbrough manager Aitor Karanka was not impressed and he criticised the atmosphere in his post match press interview.

For Carroll and West Ham the recent revival goes on. The striker has now scored five goals in only seven Premier League starts this season. Following on from last week’s spectacular effort against Crystal Palace, this match was the first time he has scored in successive league games since April.

The Hammers seem to be upwardly mobile at present and this win leaves them in tenth position, just inside the top half of the Premier League table.

Next up for West Ham, is a home fixture against Manchester City on Wednesday 1 February. Home supporters are now hopeful the Irons can revenge the 5-0 drubbing City handed out only a few weeks ago in the FA Cup third round fixture at the London Stadium.

That game and result now seems like a long time ago.