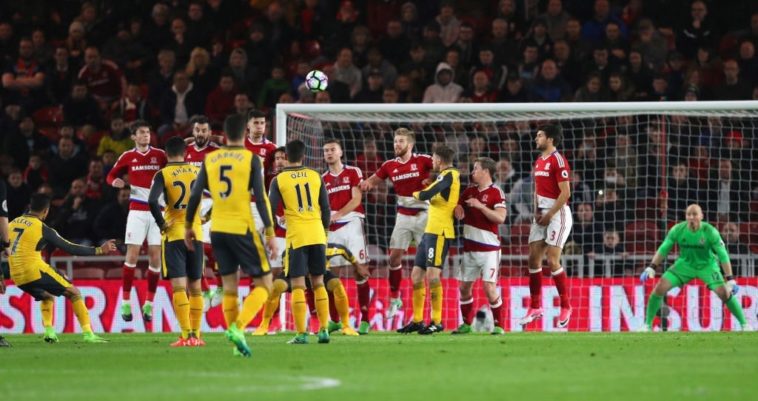 Arsenal secured their first away victory since January against Middlesbrough in a nervy game for both sides.

Both sides made numerous changes for this must win game. Middlesbrough made five changes while Arsenal made six. Wenger made the surprising decision to play with a back three. Rob Holding, Laurent Koscielny and Gabriel were the three defenders.

Granit Xhaka was fouled by Adam Clayton and Alexis Sanchez stepped up to take the resulting free-kick. The Chilean found the back of the net with a superb strike for his 19th Premier League goal of the season. Although his positioning was questionable, Brad Guzan was completely powerless to stop it.

Arsenal went in 1-0 up at the break, a massive confidence boost given their recent performances.

Boro came out fighting in the second half and got their reward four minutes later. Stewart Downing whipped in a cross for Negredo who found the bottom corner with a brilliant left footed finish to give Boro a much needed equaliser. Koscielny should have done better but it was, without doubt, an impressive effort from Negredo.

Daniel Ayala could have punished Arsenal even further but his header was cleared off the line by Cech.

Arsenal then created a few chances of their own. Sanchez played a delightful ball into the path of Mesut Ozil but the German was stopped in his tracks by Guzan. Ozil made no mistake with his next opportunity. Alexis’ ball into the box was chested down by Ramsey with Ozil on the end of it to restore Arsenal’s lead.

Even though they were in front, Arsenal were still nervous and Boro were not giving up without a fight. Negredo came close to finding an equaliser but his effort was easily saved by Cech.

The home side continued to press for a second goal and both Ayala and Gibson wasted good chances.

The final whistle blew and Arsenal celebrated a much needed three points. The performance was far from their best but it will be really encouraging to the side, especially with their upcoming FA Cup semi-final against Manchester City.

Arsenal ended a run of four consecutive away defeats and kept their top four hopes alive.

The home side can be proud of their performance but once again their lack of goals stopped them claiming at least a point. The support was fantastic but Middlesbrough look to be down and out.