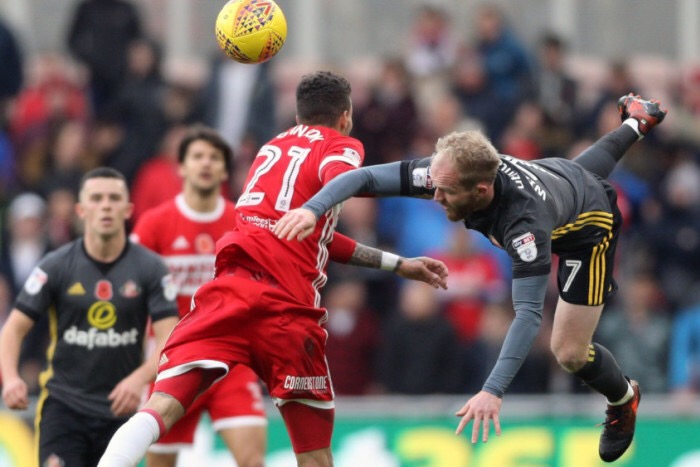 Robbie Stockdale and Billy McKinlay took the reins for the Sunday dinnertime clash at the Riverside on Sunday, following Simon Grayson’s dismissal on Tuesday night.

The interim managers started four holding midfielders and set out for a draw. Lee Cattermole returned and Darron Gibson retained his place, Vaughan and Watmore weren’t fit enough for the bench, Billy Jones started over the fans choice Adam Matthews.

The first chance fell for the visitors when Didier Ndong picked up the ball a long way out and drove a powerful shot at Darren Randolph, who spilled it on a silver platter for Lewis Grabban but the Irishman recovered to deny Grabban from only a few yards out. In all honesty, Grabban should’ve buried the chance; it would later cost the Black Cats.

Not five minutes later, youngster Marcus Tavernier put the Teesiders in front. Denmark international Martin Braithwaite ran onto a through ball and Marc Wilson was caught sleeping and let the summer recruit to get to the byline and cross. Cattermole had let the Boro academy star run into the area and let right back Jones mark him but the Birmingham born full back let Tavernier get in front of him and knock it past Dutchman Robbin Ruiter.

The home side sat back and didn’t really attack, as they knew Stockdale had set up with nine defensive minded players.

Didier Ndong, who started on the right, made a run and squared it to McGeady on the edge of the area, the shot forced a save from his international teammate Randolph.

A fizzing delivery from Glasgow born McGeady from a free kick found Lewis Grabban’s head, forcing the Boro goalkeeper into a fantastic save but the striker was offside anyway.

Cyrus Christie made a darting run from full back; Lee Cattermole stupidly dove in, taking himself out of the game. Christie played in Braithwaite who should’ve scored but Ruiter made a decent save.

Former Sunderland loanee Stewart Downing hit a free kick and it would’ve been two if it weren’t for a mixture of Ruiter and the post.

Sunderland had a chance of an equaliser when a surging run from Costa Rican left back Oviedo found McGeady who struck first time, only for it to fly wide of the Randolph’s goal.

Stockdale’s substitutions cost the visitors the game; Honeyman came on and ran aimlessly for 35 minutes, the Prudhoe born winger came on for Ndong when it really should’ve been Cattermole or Gibson. Jonny Williams then came on and was near enough ineffective; McManaman should’ve been subbed on as the game was crying out for width. I’m not claiming to be Pep Guardiola or Jose Mourinho but near enough everyone in that away end and everyone watching on TV could see what was needed.

The game ended with the Mackems making the short trip down the A19 bottom of the league. Even with the dismissal of Grayson, there’s no change in outcome, at least not until a permanent manager is appointed.

During the week, owner and chairman Ellis Shot came out in an interview for SAFC.com and claimed that “we’re in crisis and the issue is the performance on the pitch.” Although some people on social media have claimed Sunderland played better I’d personally beg to differ. The Wearsiders still failed to keep a clean sheet, failed to score, and failed to put in any effort. Garry Monk’s side were far from spectacular and looked like a team that were lower down in the division.