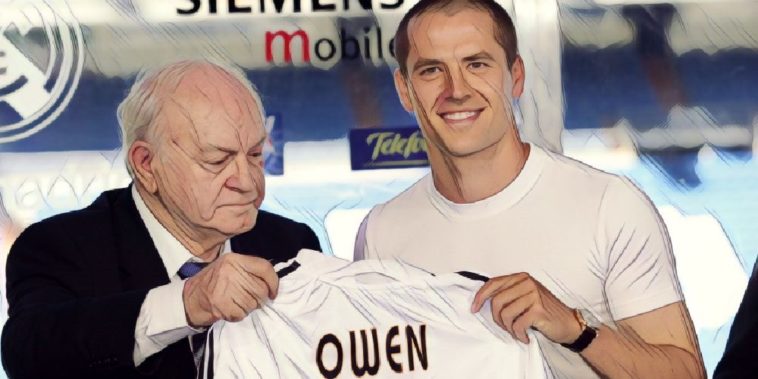 Michael Owen has revealed how he went against the advice of Jamie Carragher when deciding to leave Liverpool and join Real Madrid in 2004.

Owen came through the academy ranks on Merseyside and established himself as one of the finest forwards in the Premier League, bursting onto the scene as a teenager and winning back-to-back Golden Boots for the Reds.

The former England international won four major honours with Liverpool and was named as the winner of the Ballon d’Or in 2001, before leaving the club to become the latest Galactico signing at Real Madrid three years later.

His move to Spain proved short-lived, however, as he returned to English football with Newcastle just a year later, his latter career ravaged by injuries during spells at the Magpies, Manchester United and Stoke.

Owen has now recalled the moment he first heard of the interest in his services from the Spanish giants, and how teammate and close friend Carragher advised him against a move to the Bernabeu – only to inadvertently play a role in the forward’s desire to succeed in La Liga.

“I was in America, me and Jamie Carragher were sharing the same room,” Owen told talkSPORT.

“We were on a pre-season tour and Rafa Benitez had just taken over at Liverpool.

“My agent phoned me and said ‘Madrid want to buy you’. I just remember putting the phone down after a couple of minutes discussing it and Carragher has looked at me and said ‘don’t do it’.

“And I said to him ‘why not?’ And he said I wouldn’t play there. That actually made me sign for them, thinking I’m going to prove Carra wrong!

“I always say to myself that it was a nice problem. How could you complain about Real Madrid being interested in you?

“Talking of sleepless nights… one day I was thinking I can’t leave my family and friend [at Liverpool]. I was virtually born at this football club and had come right through the ranks.

“But then if you don’t go you’ll have sixty years of thinking what might have been. It was the worst problem in the world, but a lovely problem at the same time as well.”