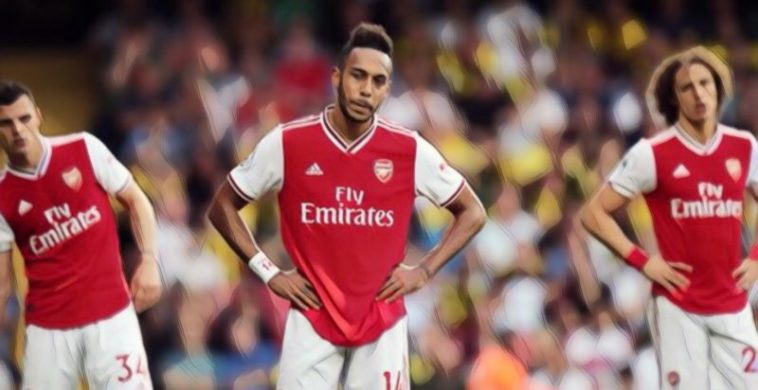 Paul Merson has blasted Arsenal boss Unai Emery and has placed the blame for the club’s capitulation at Watford this weekend firmly at the manager’s door.

Arsenal surrendered a two-goal half-time lead to draw at Vicarage Road on Sunday, as goals from Tom Cleverley and a Roberto Pereyra penalty cancelled out Pierre-Emerick Aubameyang’s first-half double.

Emery’s side were overwhelmed during a dominant second half from bottom club Watford, who were unlucky not to secure all three points after firing 23 shots on goal after half-time.

Both of Watford’s goals came from defensive mistakes in the Arsenal backline, firstly from Sokratis’ stray pass before David Luiz’s clumsy foul allowed Pereyra to equalise from the spot late on.

Arsenal’s defenders were heavily criticised following their calamitous display, but despite the individual errors, former Gunners midfielder Merson believes manager Emery should shoulder the blame for a disappointing result.

Tom Cleverley (Watford) on Arsenal: “I feel we were well organised from their goal kicks. It is something we worked on all week. We weren’t surprised they tried to play like that. It was just more of a surprise they didn’t adapt during the game & were pretty stubborn with it.” pic.twitter.com/pKZiAhtBUY

“I’ve got to put it on the manager,” Merson told Sky Sports.

“People will say there were experienced players on the pitch, but he’s the manager and they’re paid to listen to him.

“You can’t have a manager give instructions on how to play and then they go out and do their own thing. There would be mutiny, so they’re listening to him and he’s not getting it right.

“His substitutions weren’t right. They needed to keep the ball in that game but they kept giving it away cheaply. The only player who didn’t give the ball away all game was Mesut Ozil. You just knew that Arsenal needed to score another goal but he was bringing youngsters on in a game when you’re under pressure.

“Since this new rule started when they can pass the ball in the six-yard box, why have they all started doing that? No one did it last year, and now they’re all doing it.

“The manager should have seen that and got the message out onto the pitch to stop that and get the ball forward. If they don’t win the first ball, they can win the second ball, and go from there. If Watford did win the ball in their own half, they have to come through three-quarters of the pitch to score. What are they trying to do?

“To get Sokratis to play out from the back… the lad can’t play.

“He’s not David Luiz. He can pass, he’s comfortable on the ball. No way can Sokratis play the same way. They need to play three at the back as they’re not good enough to play a four. They let in too many goals and make too many mistakes.

“It’s like anything in life, if you keep on doing the same things, you’ll keep on getting the same results.

“Sometimes these players think they’re something special and won’t be closed down – it’s pathetic. At Watford in the first half, it was a walk in the park for Arsenal, they’re 2-0 up and you’re thinking it’s the end of the football match. But I don’t know many other teams where the next minute, you’re hanging on.

“Watford had been beaten 3-1 at home to West Ham and 3-0 at home to Brighton. You’re pushing them out the dressing room at half-time, it’s the last thing they would want to do is go out on the pitch for the second half.

“Only Arsenal would give them a chance to get back in the game. The shackles came off and Watford felt like they had nothing to lose, but the manager got it horribly wrong.

“I couldn’t believe he brought Ozil off. Who else is going to open up a team except him?