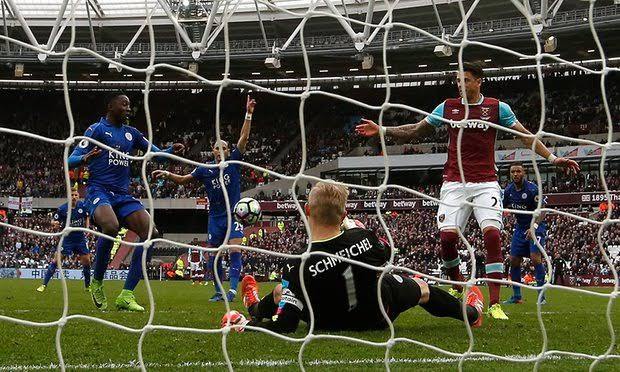 West Ham’s dismal run of results at the London Stadium continued on Saturday with a 3-2 defeat to Leicester City.

Two goals for the visitors, inside the first seven minutes, set Leicester on the way to their first Premier League away win of the season.

A Manuel Lanzini free kick on 20 minutes brought the Hammers back into the game. Then Jamie Vardy scored from close range to give the visitors a 3-1 half time lead.

A number of missed opportunities for the Hammers, as well as a couple of fine saves from Kasper Schmeichel, meant the score remained 3-2, leaving most of the crowd very frustrated.

West Ham were guilty of gifting Leicester two early goals, as their poor defending allowed the visitors to take the early initiative. With most the crowd hoping to see West Ham come out of the blocks quickly, what they saw was the reverse.

After only five minutes, Riyad Mahrez swung a hopeful cross into the West Ham penalty area; the ball evaded everyone and went straight into the goal.

The West Ham defence were at fault as they were too slow to close down Leicester’s Algerian playmaker, and goal keeper Darren Randolph, although unsighted, should have done better.

Two minutes later and things got worse for the home side. Robert Huth, completely unmarked in the penalty area, headed home a Marc Albrighton cross.

Having conceded two soft goals, albeit with some extremely poor defensive play, West Ham finally came into the game and started to exert some pressure.

When Michail Antonio was upended just outside of the penalty area on 20 minutes, Manuel Lanzini stepped up to take the resulting free kick. He scored with a precise shot over the wall and into the top right hand side of the Leicester goal.

Later in the first, with the Hammers pushing for an equaliser, an Andy Carroll goal was harshly ruled out for an offside. Within minutes of this decision, Leicester had again extended their lead when Vardy scored from close range, after a corner was not cleared by the Hammers inept defence.

West Ham left the field at half time to boos from the home fans, who are now thoroughly fed up with the team’s poor home form.

Due to West Ham’s miserable defensive display in the first half, the second period was going to need a huge improvement if the Hammers were going to get anything from the game.

More urgency was required, and as the half progressed, this is what West Ham produced as they began to dominate the game.

On 63 minutes the home side’s constant pressure at last paid off when Ayew headed in after Carroll had won the ball at the back post. The Ghanaian striker then had a golden opportunity to score the equaliser, when Antonio played him in. Unfortunately, Ayew had a rush of blood to the head as just when it looked like he could not miss, he scooped his shot horribly wide.

For the final 20 minutes, Leicester had their backs to the wall and how West Ham did not get an equaliser, was down to both bad luck and goalkeeper Schmeichel, who made a host of fine saves.

The best of these came deep in added time when he saved a shot from Carroll, palming the striker’s shot away from point blank range.

That save turned out to be the last meaningful action of a tense and eventful match. Leicester had their first away win for 11 months, while the Hammers were left to curse their awful defensive play in the first half and their bad luck in the second.

With the international break coming up, both teams have a couple of weeks to recuperate. West Ham now sit in 12th position in the Premier League on 33 points, while Leicester have three points less and are in 15th place.

Next up for the Hammers is an away fixture at Hull City. This is going to be a tricky match as the Tigers are in the relegation zone and desperate for points. Slaven Bilic and his coaching team need to work on the team’s defence or else his side will be slipping into a relegation battle.