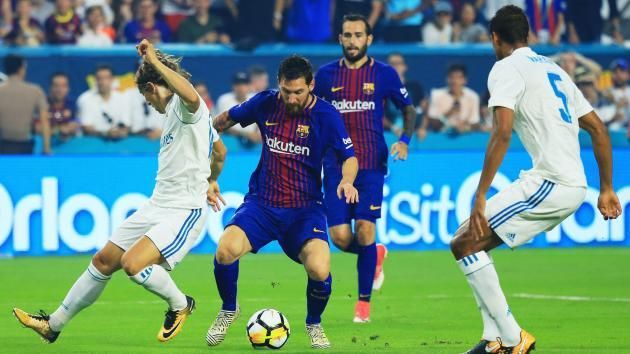 The Spanish footballing season starts off with one of the fiercest rivalries in the world. An El Clasico is always a big occasion, regardless of the event.

Zidane’s men face off against Valverde’s new Barcelona in the Catalan’s backyard. Here’s what we can expect from the tie.

Real Madrid played four games in their pre-season, winning one and losing the others. Real and Barca had in fact faced off in America, with the Catalans coming out on top. Los Blancos also had a game against Manchester United in the UEFA Super Cup, which they won 2-1.

Barcelona had a slightly larger pre-season, playing five games, three in America, and two in Spain. The Blaugrana won four while drawing one.

Both the clubs have had interesting transfer windows, both buying promising youngsters instead of big name signings.

The biggest signing Barca have made is 23 year-old right-back Nelson Semedo for 30 million euros. Winger Gerard Deulofeu has also returned to the Camp Nou after a few years travelling abroad. Other than the two, young Brazilian centre-back Marlon has joined from Fluminense. Former Spurs midfielder Paulinho, Ousmane Dembele and Phillipe Coutinho have all been heavily linked with Barca. Neymar, arguably the biggest signing this season, if not in this decade, left Spain for a world record fee of 222 million euros.

Real Madrid have definitely had a more eventful window than their rivals, getting rid of star names such as Alvaro Morata, Danilo and James Rodriguez. Veteran defender Pepe left for Turkey on a free deal after his contract expired. Burgui, Mariano Diaz and Diego Llorente all left the club after uncertainty over their future at the Bernabeu. As for incoming players, youngsters Theo Hernandez and Dani Ceballos are the only players to have been signed. Numerous players have returned from loan, including Jesus Vallejo and Marcos Llorente. Real are expected to make 1 or 2 more signings before the window closes.

Both squads have most of their starting XI fit and ready to go. Barcelona have no players suspended or injured.

The tie will surely be a close one, but with the Catalans having the home advantage, we predict them to have a 1-0 lead going into the second leg.