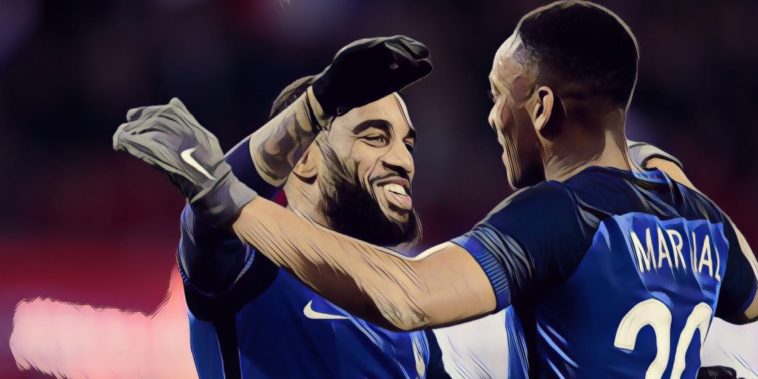 Marcel Desailly has said that the likes of Anthony Martial and Alexandre Lacazette were left out of the France squad because they are ‘one level lower’ than the players who have made the side.

The French got their World Cup campaign underway with a less than convincing 2-1 win over Australia, with Antoine Griezmann and Paul Pogba getting on the scoresheet.

However, the build-up to the finals was dominated by not who would be making the trip to Russia this summer, but who wouldn’t, with France one of the sides to leave out a number of big name players.

Manchester United winger Anthony Martial and Arsenal striker Alexandre Lacazette were just two of those players, as was Man City record signing Aymeric Laporte, with Didier Deschamps having a plethora of options to pick from for Les Bleus.

However former Chelsea defender Marcel Desailly has backed his former France team-mate for the decisions he has made:

“That’s a choice, that’s Didier’s one. He tried them during the European Championship. He may have realised that they were one level lower than what he was looking for.

“Due to his philosophy and the way he chooses to use players together, he may have decided not to use them this time.

“The level of experience can be one reason but they could have won the competition in 2016. We need to keep working.

“We thought that Didier had his group at the end of the Euros. For this World Cup, he has no choice but to rebuild a group to get a chance to [win it].”