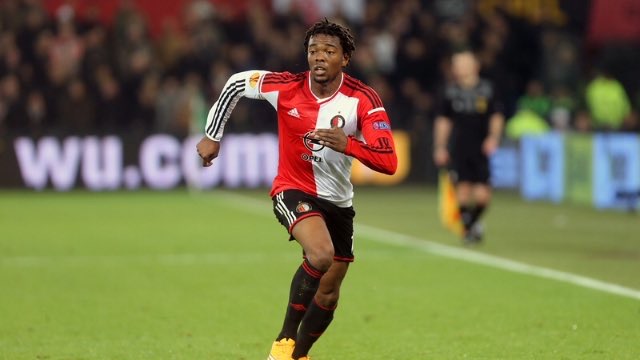 Mark Hughes is looking to lure the Miquel Nelom to the Bet365 Stadium.

The 26-year-old was a regular in the Feyenoord side which won the Eredivisie.

Stoke have been linked with left-backs on numerous occasions already this summer. Hughes has been reportedly interested in Luke Shaw. However, Shaw is now poised to stay at United.

If Stoke signed Nelom he would offer something different for The Potters. He is renowned for his crossing ability. This would be an important trait for Stoke who didn’t have the best crosses last season from players like Pieters and Johnson.

Furthermore, Nelom also possesses a killer ball. While this isn’t necessarily vital for a full-back it could prove handy. Nelom also likes to play the ball off the floor. This would benefit taller players like Crouch.

However, interest in the player is high and it’s being reported that Espanyol want the left-back.

Former Watford boss Quique Sanchez Flores’s side finished 8th in La Liga last year and they are pushing for Europa League spot this year. This might be enough to lure Nelom to Espanyol. Despite having a poor season last year Stoke have the advantage of playing in “The best league in the world.” This might make Nelom opt for Stoke rather than Espanyol.

In other transfer news for The Potters, it looks like 18-year-old Josh Tymon could be leaving Hull for Stoke. Tymon played 12 times for Hull last year, however, just five of them were in the Premier League.

Tymon is also a wanted man. Reports are emerging that Jurgen Klopp wants to bring him to Merseyside.If Liverpool pull it off he would definitely bolster the Reds defence. As well as Liverpool and Stoke, it looks like Steve Bruce’s Villa and Marco Silva’s Watford are looking to sign up the youngster.

In other news, Stoke are now willing to let Glenn Whelan leave the club. The 33-year-old has attracted interest from Championship Aston Villa. Steve Bruce did have a bid rejected but it looks like he isn’t done with Whelan yet. The Irishman looks surplus to requirements after the recent signing of Darren Fletcher. However, will the Irishman want to leave the club that he’s spent nine years at?

Our last piece of transfer news is that Stoke is preparing at £12 Million bid for Man City’s Fabian Delph. The midfielder will most probably be part of Pep’s clear out which could allow Stoke to swoop in with a bid. The 27-year-old needs to be playing first-team football at his age and Stoke can guarantee that.

Stoke fans what do you make of the possible signings of Tymon and Nelom?